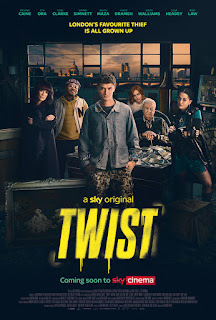 Coming soon to Sky Cinema, are we going to want some more of this Twist with a twist or is it all a bit rich? Watch the trailer...
Press Release
Twist, a Sky original, is a Dickens’ classic brought thrillingly up to date in the teeming heartland of modern London, where a group of street smart young hustlers plan the heist of the century for the ultimate payday.

At the time of casting, Sir Michael Caine said, “Fagin is such an infamous character, it’s going to be great fun playing him. I’m really looking forward to working with Lena, Raff and the rest of the cast in London when we start shooting.” Lena Headey commented that she “couldn’t be more excited to take on the iconic character of Sikes from Oliver Twist. Flipping roles without apology or character softening is a brilliant way to breathe new life into established materials and bring it to new audiences.” And Raff Law added "I’m excited to play such a well-loved literary character, and I’m looking forward to working with Martin Owen to bring to life his new take on the character in modern-day London.”
Twist, directed by Martin Owen (The Intergalactic Adventures of Max Cloud) also stars David Walliams and Noel Clarke. The film is produced by Unstoppable Film and TV, Pure Grass Films, FAE Film and Television, and is co-produced by Sky and Red Bull Media House. Twist is written by John Wrathall (The Liability) and Sally Collett. Producers are Matt Williams, Ben Grass, Jason Maza and Noel Clarke.
Image - Sky Cinema
Email ThisBlogThis!Share to TwitterShare to Facebook