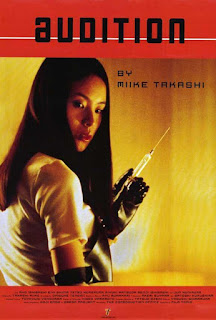 We love Halloween here at The DreamCage and we love the countdown to it even more as, every day in October, David Ames opens a window (well, writes an article) in his Hallow-vent Calendar of Asian horror films. His choice for Day 13 of Hallow-vent is Audition ... 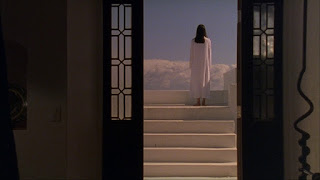 Today’s film is one that I have been reading about for literal years. It has been on many lists of the greatest horror films ever made, and although I have been aware of it since the American release, I never got around to watching it. I am not sure why, but on a whim this past summer I bought the novel this film adapts, and after finally reading it, I knew that I needed to see what all the fuss was about. Today, we look at Takashi Miike’s 1999 horror classic Audition.

Audition follows the life of middle-aged widower Aoyama who, seven years after his wife’s death, decides, after a conversation with his son, that it is time to start looking for a new wife. He is lonely, and after discussing his plans with a friend in the film industry, Aoyama agrees to hold auditions for a film, one that may or may not ever happen, but could be used to interview potential women, both for the role and as a prospective love interest.

While combing over stacks of resumes, Aoyama stumbles across a young woman named Asami, and he immediately is drawn to her. She is strangely beautiful, and the essay she wrote in her resume speaks of a much older and mature soul, something Aoyama desperately wants in a partner. At the audition process, we see a cadre of woman from all different walks of life and with different looks vying for the (probably) non-existent role, but Aoyama only really has eyes for Asami. When they finally meet, he falls, and does so hard. While his friend finds something off about her, Aoyama is in deep already.

After calling her up and inviting her to dinner, they meet and have a wonderful time. Aoyama is warned again by his friend about some of the things Asami said in her interview, none of which seem to be true, but Aoyama doesn’t care. His friend tells Aoyama that he should wait to call her, to ensure that she isn’t just after a role or money, and so Aoyama does just that. He struggles with the waiting, but his impatience is punctuated by scenes of Asami seemingly sitting motionless by a phone for days at a time, surrounded by an empty apartment, filled with only a phone, and a large, mysterious bag.

Eventually Aoyama does reach out, and we see a montage of them beginning to date. Aoyama informs her that there was an issue with the film she auditioned for, but that he would still like to see her again. As their relationship moves to the next level, things begin to progress, and one night, after an evening of passion, Asami disappears from a seaside hotel. Aoyama is beside himself and as he attempts to find her with only the limited information he has about her, a string of grisly murders and unfortunate events seem to flow from her wake.

As a film, the cinematography is great. There are interesting transitions, and color shifts which help to tell the story of this doomed romance. There are also interesting plays with dreams and hallucinations which add to the overall tension in the film.

Ryo Ishibashi plays Aoyama with a certain dignity that befits the role. Miike has him portray Aoyama as a character who, while not incredibly seedy, is still participating in the exploitation and manipulation of a young woman. Still, he does come across as sympathetic, and in the final scene, he pulls off the difficult task of looking like his suffering is extraordinary, while not being able to move his body or say anything.

Honestly though, Eihi Shiina’s turn as Asami is what makes the film. She is meek and quiet, understated and innocent, but when she turns, and believe me she does, it is insanely well done. Her bright smile means something completely different and her ability to come across as maniacal is perfection. Her innocent voice playfully saying “deeper, deeper” will haunt me for years to come.

Overall, I really enjoyed this film and I now understand why it makes this list. My only real complaint is that the film really seems to push for a strange form of empowerment like we see in revenge exploitation movies like I Spit on Your Grave but in the novel, Aoyama isn’t a horrible person. In fact, he feels incredibly guilty for a majority of the novel, and isn’t just infatuated with Asami; he is full blown in love with her. The film also adds a lot of weird things like the bag (which was awesome for the film) and the murder history that don’t really appear in the novel. The ending in the book is so weirdly unexpected, unlike what we see coming in the film.

That being said, this movie is amazing and should be seen if you are a fan of this type film. It is romantic and kind of sweet at moments, but gory and bloody and psychologically haunting at others. As an adaptation, I liked it, but as a movie, I loved it and will probably come back time and again to this one.