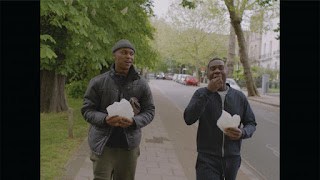 From the UK Focus strand at London Film Festival, and with spoilers, Steve Taylor-Bryant watched the short film Mandem...

Mandem follows two friends as they go about their business day around London together, albeit their business is drug dealing. From when they wake up to last thing at night, we follow Ty (Bradley Banton) and Malcolm (Stevie Basaula) from their estate to a high end art dealers house to a rundown alley, to the city and the high financiers, to a student party and then back home. Mandem is a "day in the life" short film, but also a film that challenged all my preconceptions.

When I usually see drug dealers on my TV screen, especially those from the BAME community, there is a sense of dread, like they do what they do to survive or they may be in danger or something; white drug dealers in pop culture tend to be portrayed more heroic for some mind-blowingly confusing reason. But no drug dealing film that I have seen shows dealing to just be a job. Mandem, in its short runtime, shows maybe 30 seconds of the perceived violence we expect of the subject matter with its turf war scene, but it is mainly just how mundane and boring the job is and that threw me at first. I have been conditioned by the media to view drug dealers as dangerous criminals, and a lot of them are, but in Mandem, Ty and Malcolm are just doing a day's work, it is them walking or driving to their appointments discussing future business opportunities, or the events of the day, or usual young people type stuff. It is not all crack dens and guns and I found that incredibly refreshing, a wonderful take by writer director John Ogunmuyiwa who gave us more of an observational film than a scripted attempt at the pop culture norm. Preconceptions are again blown apart at the end with the kiss between Ty and Malcolm, I wasn’t expecting it, I don’t think anyone would have been expecting it, and that comes down to our conditioning again, what we are taught to see by the media we consume.

Mandem may not be for everybody and I get that, a mundane day at work is still a mundane day at work regardless of whether its dealing drugs or working in an office, but from a storytelling and filmmaking point of view it is incredibly interesting to watch. There is some technical stuff to admire, screen ratio changes, some very sharp editing, a cleverly filmed party scene, but it is the removal of all my preconceptions by the way the story unfolds that sticks with me long after the credits have finished. Ogunmuyiwa has certainly taught me a lesson with Mandem and I hope to see what he can accomplish in the long form feature format before too long, as what he can do with observational film in the short is very intriguing indeed.
Watch Mandem for free on BFIPlayer as part of London Film Festival.
Follow Steve on Twitter @STBwrites
Image - BFI
Email ThisBlogThis!Share to TwitterShare to Facebook