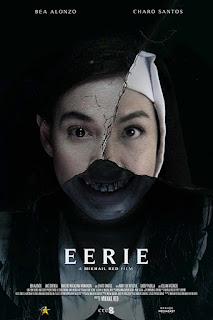 We love Halloween here at The DreamCage and we love the countdown to it even more as, every day in October, David Ames opens a window (well, writes an article) in his Hallow-vent Calendar of Asian horror films. His choice for Day 15 of Hallow-vent is Eerie ... 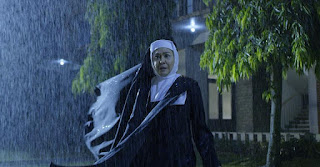 The church, and its violent history and/or tendencies is a topic that is common in horror movies. The oppressive atmosphere and secrecy of convents, and the history of abuse brings connotations to the subject matter, and when utilized correctly, these elements help to create solid horror movie fodder. Today, we visit the Philippines for the first time in our journey through Asian horror, as we watch this Netflix original: Mikhail Redd’s 2019 supernatural film, Eerie.
Eerie follows the tumultuous career of Pat Consolacion, a guidance counselor at an all-girls catholic school. Things have not been great for this school in recent years. They had a suicide in a bathroom, and strange things have been happening ever since. Late one night, another of the girls uses that same restroom, and when she is found the next morning, she is changed, and quite disturbed. Pat is busy dealing with the mental health of quite a few of her students, especially Joyce, who has also attempted suicide before.

Late one evening, as Pat is working late, we see her set up her desk, and turn on her tape recorder. As the camera pans around, we see a student sitting in the chair opposite Pat, and we learn through conversation that this is Erika, the girl who committed suicide.

Over the course of the film, there is more death at the school and secrets about the past, and about the head nun who runs the school begin to come to light. Things are not at all well at this school, and as Pat works to discover the truth, she is brought into a world that she is not prepared for. Using her gift to talk to the dead, Pat hopes to help Erika and to understand what happened, so that Erika can move on, and Pat can help the other girls in the school.

I won’t say anymore, in case you are wanting to watch this film. It is, honestly, so well made. It looks great, and the stylized use of the camera to draw the viewer’s eye, and to play with expectations is masterful.

As a whole, the film falls somewhat flat. It does an incredible job of establishing an atmosphere that permeates the entire film. It is oppressive and uncomfortable, and there are some genuine scares here, but so much relies on classic horror tropes that any chance at delivering an original plot somewhat fall away, and we are left with a well-made treasure trove of tropes.

You should still give this film a watch, if you enjoy the subject matter, because as I said before, it is a well-done film. Just don’t expect it to be mind-blowing or add anything to the genre as a whole, because it will disappoint. Just pop some corn, and sit back, basking in the comfort of the known and expected, and enjoy a few creepy moments and scares along the way.