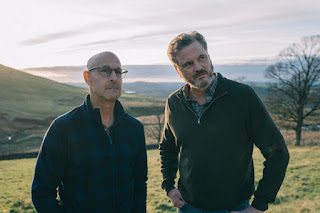 There is no more heartbreaking experience than losing a loved one, but perhaps the worst way of losing them is to lose them twice over. This is what dementia means, and it’s one of the hardest experiences people can have, for those who go through it, and for those who watch them go through it.

Supernova is a quietly heartfelt and intimate movie from actor-turned-filmmaker Harry Macqueen, and it boasts two powerfully affecting performances from Stanley Tucci and Colin Firth, both at the peak of their form. Firth and the London-based Tucci are longtime friends and their gentle chemistry comes across in this film.

Tucci and Firth play Tusker and Sam, a couple who have been together for two decades: Tusker is a respected novelist and Sam is a composer and pianist. They have put their careers on hold because Tusker has been diagnosed with early-onset dementia.

The couple decide to take their camper van for a trip to the Lake District to have some time together, to drop in on Sam’s sister and her family, and perhaps, to come to terms with the idea that this trip may be the last during which Tusker is still himself.

Tusker is ostensibly still working on a new book, but he is more enthusiastic about gazing into the night sky, pursuing his hobby of astronomy.

There isn’t much in the way of action in Supernova, their journey is a tour through the stunning mountain scenery of the Lake District, taking in misty mornings and shimmering water. The trip is punctuated by visits to family, by conversations, embraces, promises, sad goodbyes and by a charming exchange where Tucci’s Tusker explains the wonders of stardust creation to his little niece.

With the amiable demeanour that Tucci is so good at, Tusker describes the unimaginable vastness of space and the constant cycle of life and death, including the spectacular death of a star in a Supernova explosion, after which it sends its matter out into space to create anew. It’s a beautiful explanation, and perhaps a therapeutic one for Tusker, who is adjusting to the idea that the profound enigma of death is imminent.

Mike Leigh’s regular cinematographer Dick Pope finds as much beauty in the dimly-lit indoor scenes as in the glowing autumnal landscapes, making the intimate, emotional scenes appear all the more natural. 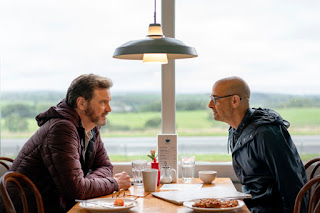 The drama arises when, after so many years of mutual harmony, Tusker and Sam’s individual plans for the future conflict, and they must confront the question of what it means to love someone in the face of a tragic illness which will bring an inevitable separation. However, this is a journey on which there is no going back, nor is it a situation where a compromise can be reached – events can only move forward, and someone has to decide how it all ends.

Sam is hurt when he discovers that Tusker has deliberately left behind the medication that is meant to delay his mental decline, but which Tusker has decided has little real effect. Instead, he has brought with him another drug, which will halt his deterioration before it goes any further, but in the most final way.

The crisis comes as the two must try to openly discuss their individual feelings. Tusker has made quiet, stoic peace with his fate, and for him the trip represents the tying up of loose ends in the indeterminate amount of time he has left. But for Sam it is a struggle to drop his defence and denial as he clings to the belief that their relationship will see them through to the end.

Macqueen interestingly builds on the chemistry and established qualities of his leading men. Tucci and Firth are entirely believable as a long-term couple, sharing in-jokes, affectionately teasing each other and reflecting each other’s mannerisms. The two actors seem perfectly at ease and comfortable. Firth’s Sam displays his English reticence and inhibition until his fear at being left alone overcomes him. Tucci’s Tusker is warm, laid-back, amused and playful, which makes the scenes when he is starkly emotional all the more poignant.

Playing the partner left behind by dementia is a difficult task and there have been few depictions of the male perspective when placed in this painfully vulnerable position. In Supernova we come to understand that dementia brings the only grief that can be shared, for a time, by those that are dying and by their mourners, and how problematic and painful that experience is. Tusker voices his dismay at Sam’s fragile façade, "You're not supposed to mourn somebody when they are still alive," he gently protests.

Supernova chooses not to portray what it may be like for the surviving partner to live through the terrible process of their beloved’s decline, but instead appears to support the decision of the victim to decide how they wish to deal with their fate. It remains a beautifully acted and affecting depiction of people having to accept the inevitable sorrow of mortality.