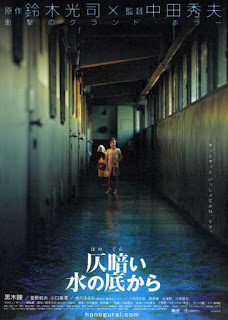 We love Halloween here at The DreamCage and we love the countdown to it even more as, every day in October, David Ames opens a window (well, writes an article) in his Hallow-vent Calendar of Asian horror films. His choice for Day 17 of Hallow-vent is Dark Water ... 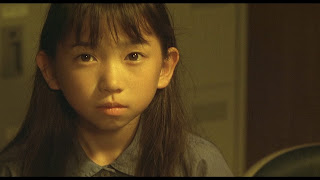 As we have already talked about this year, American remakes of Asian horror tend to be poor, and the subtlety and genuine unease common in these foreign pictures seems lost on western adaptations. Rarely are there remakes that stand up to the original. In fact, the only one I can remember as being quality was The Ring, and so after watching this American movie years ago, I stumbled across it on a list of the best Asian films and worried that like so many more, the American movie would have ruined me on the original. Luckily the American remake was pretty rough overall, and the original soars in comparison. Today we look at one of the biggest films of the Asian horror boom of the 90s and 2000s with Hideo Nakata’s 2002 supernatural horror film Dark Water.

In the middle of an ugly and underhanded divorce with her husband, Yoshimi Matsubara, and her young daughter Ikuko, are out on their own for the first time, and after quite the ordeal, finally find a new apartment in which to live. It isn’t in the best shape, but at the time, with Yoshimi still searching for a job, the two must make ends meet however possible.

Yoshimi’s ex-husband is trying to discredit her as an unfit mother because of psychiatric treatment she received long before Ikuko was born, and the fact that Yoshimi is continuously late to pick up her daughter from kindergarten (because she is trying to find a job) is not helping the case. Above all else, Yoshimi needs to protect her daughter from the world, and maintain the one healthy relationship she has in her life.

After moving into the apartment, the small family begin to experience strange happenings all surrounding their water and the strange leaks that seem to be coming from an abandoned and locked apartment upstairs. At this time, both Ikuko and Yoshimi are beginning to see strange things, are continuously find a small orange bag that mysteriously appears and reappears regardless of what anyone does to it. When Yoshimi sees a poster about a missing girl who seems to be holding the same bag, and Ikuko starts to draw the same child, and begins talking to herself, Yoshimi must track down and solve the mystery to save her own sanity and her relationship with her daughter.

This is all the plot you are going to get out of me. Unlike many films of similar nature, Dark Water has a real soul and heart that is incredibly touching. Maybe it is because I was also the child of a somewhat turbulent divorce, but I see my mother’s struggle in Yoshimi’s and I viscerally understand her need to maintain that relationship. What she does ultimately to save her daughter is so moving and powerful that the denouement leaves you less afraid and more somber and reflective.

Performances across the board are very good, but overall, Hitomi Kuroki is the standout. She portrays Yoshimi with a strength that is common in motherhood, but the fear and uncertainty of the custody battle, the sadness and worry about being able to provide, and the downright terror for the safety of her daughter come through in waves. There is not a moment on screen when she doesn’t shine.

The film is a slow-burn, but it is an incredibly watch. So far it is the most emotionally charged film of the Hallow-vent season, and I am not sure many others will come close. Please, if you have not seen this film yet, avoid the western remake and instead watch the original. It is well worth your time.