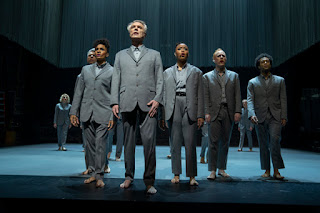 It’s not the first time a major film director has felt moved to create a film of David Byrne’s stage performances. In 1984, Jonathan Demme made Stop Making Sense, a concert movie of Byrne’s former rock group ‘The Talking Heads’ which is now acknowledged as one of the greatest rock concert films ever made. Now Spike Lee has documented Byrne’s 2019 Broadway show American Utopia, a stage version of Byrne’s album of the same name featuring the artist alongside eleven outstanding musicians.

The show opens on a stage that is bare except for Byrne, seated at a table with a shimmering, silver chain curtain on three sides framing the stage. He is holding a replica of a human brain and he sings a song about the complexities of neural connections, pointing out various areas he is describing: “Here is an area of great confusion/ Here is a section that’s extremely precise/ And here is an area that needs attention/ Here is the connection with the opposite side.”

There’s no particular arc to the show, but the unifying theme of the songs and Byrne’s linking monologues is one of connection – connection between ‘opposite sides’ and a plea for understanding and education.

Soon Byrne is joined by two a back-up singers/dancers Chris Giarmo and Tendayi Kuumba, who introduce us to Annie-B Parson’s angular, energetic choreography, some of it adapted from Byrne’s own idiosyncratic dance moves, which will become an integral part of the whole show.

Connection can be a problematic thing, as Byrne is well aware, (he has spoken about being on the Spectrum). His lyrics often concern the most banal of subjects - buildings, cars, television, roads, clothes, friends, but he invariably has a unique perspective on even the most mundane aspects of life.

The apparent naivete and simplicity mask a fierce and curious intelligence and a sly sense of humour. The man is well read, he is remarkably philosophically and artistically literate, he is forever evolving - musically, emotionally, intellectually – he is one of contemporary music’s most novel thinkers.

Byrne’s occasional monologues display an awareness of an alienation from society – “Me, I just observe and pay attention and watch,” he says – but to belie this fact, as the show unfolds, his speeches gradually move into more social and political concerns.

For a lifelong fan, the development from the David Byrne in The Talking Heads’ Stop Making Sense concert, to the David Byrne of Broadway’s American Utopia - older, greyer but surprisingly little changed - was inevitable, all the signs were there.

Demme’s 1984 concert film captured Byrne's distinctive misfit charisma, and 35 years later, in American Utopia, Byrne affects another grey suit on stage reminiscent of the ‘big suit’ he wore for the Stop Making Sense concert – better fitting now and echoed by all of the musicians and dancers, all barefoot, perhaps to underline the ‘ordinary, grey everyman’ persona.

The eleven other performers, which Byrne takes pains to introduce individually, stressing their diverse ethnic backgrounds, are all musical multitaskers. Untethered to amplifiers or drum sets or big chunky keyboards, they carry wirelessly amplified instruments so their movements on stage are uninhibited. They can march, step, dance and play around the stage, orbiting Byrne in precisely synchronized routines as they perform 21 songs. 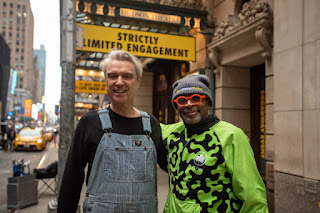 Impeccably rehearsed they may be, but they also exude an infectious sense of freedom, exuberance and absolute joy in the rhythms and the music. Director Spike Lee cleverly emphasises this feeling of openness and liberty by placing his camera in a dizzying array of angles: head-on, looking down from ceiling height like Busby Berkeley, punctuated by close-ups of the musicians revelling in the delight of communal participation. As Demme did before him, Spike Lee recognises that a David Byrne show is as much theatre, as it is dance performance, as it is a one-man musical.

The audience is not immune to the energy and excitement radiating from the stage and are on their feet singing, clapping, and bopping around for most of the numbers. Many favourites from the Talking Heads catalogue find their way into the show – ‘This Must Be the Place’, ‘Born Under Punches’, a fantastic live version of ‘I Zimbra’, ‘I Should Watch TV’, a humorous nod to social anxiety disorder in a unremittingly funky ‘Everybody’s Coming to My House’ while ‘Don’t Worry About the Government’ has a particular poignancy in these troubled times. All build up to triumphant renditions of ‘Once in a Lifetime’ and ‘Burning Down the House’.

But there are moments of sober refection. ‘Bullet’ is a lilting lament about a bullet coursing through a human body. There is a tribute to the NFL star and civil rights activist Colin Kaepernick, and Byrne respectfully offers a powerful cover version of Janelle Monáe’s ‘Hell You Talmbout’ in which the singers ask the audience to repeat the names of the black people who have been killed in confrontations with authorities. In one monologue Byrne outlines the poor turnout figures at elections and encourages people to go out and exercise their right to vote to preserve democracy and to exert control over their own futures.

American Utopia is an exhilarating introduction to Byrne’s musical and personal preoccupations and an implicit examination of the chaos of contemporary America. There is a message of hope in the theme of connection and the way he makes his stage a happy, harmonious, communal space which reaches out to the audience. But it is telling when he asks them to join in the final song, “Would you like to come along?” he asks. “You can help me sing the song.” And the song is - ‘The Road to Nowhere’.

Afterwards, Lee’s camera follows Byrne off the stage, out into the wings and to the dressing room, where he congratulates and hugs his colleagues, bids them goodbye and goes out into the New York streets, gets on his bike and cycles away into the night, one man in the cosmos.
Review Copyright R.H. Zelen – ©RenZelen 2020 All rights reserved.