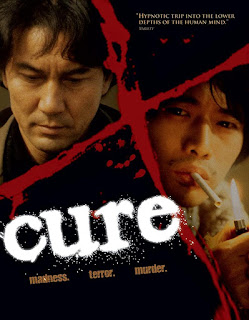 We love Halloween here at The DreamCage and we love the countdown to it even more as, every day in October, David Ames opens a window (well, writes an article) in his Hallow-vent Calendar of Asian horror films. His choice for Day 19 of Hallow-vent is Cure ... 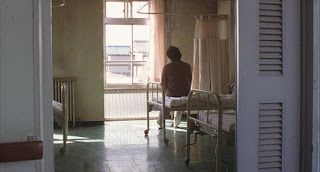 Today’s film is unlike any other that I have watched so far this year. At first I couldn’t understand how many could consider it a horror film at all, but after watching and ruminating, I now get why it fits into this genre. Today, we look at the 1997 Kiyoshi Kurosawa police procedural Cure.

In this film, we are set to follow harried detective Kenichi Takabe as he investigates a series of brutal murders. The only connection between these strange killings, all perpetrated by acquaintances and even spouses of the victims, is that after death, each victim has had a large X carved into their chest. While interviewing each of the murderers, Takabe is given the same story time and again: I knew what I was doing, but it was like I knew it was the right thing to do at the time. I was calm.

While struggling with the case, Takabe is also dealing with serious marital troubles, as his wife appears to be suffering from some sort of serious dementia. Eventually, there is a break in the case and Takabe comes across Mamiya, the person who appears to connect all the cases. Mamiya has seemingly lost his short term memory and cannot hold a coherent conversation, without resorting to questioning the detectives and those surrounding him about their lives.

After research and interrogation, Takabe learns that all of the murderers had been strangely mesmerized and it seems as though Mamiya is at the center of it all.

I don’t want to reveal too much more because, as police procedures usually do, this film also contains a fair amount of mystery and discovery. What I can say is that, while it doesn’t carry the same brutality as Se7en, Cure is still impressive and incredibly immersive. The case haunts us just as it haunts Takabe, and the ending has as much foreboding as anything I have watched.

Koji Yakusho and Masato Hagiwara, Takabe and Mamiya respectively, carry this film in tremendous ways. Yakusho is struggling and frustrated and even afraid, and that pours into his performance. He plays it well and understated, truly expressing the feelings of a man who has been taught to quell his emotions because of his work. Hagiwara pulls off the strange, almost incoherent antagonist with pitch perfect standoffishness. When his shift in character comes, while we somewhat see it coming, the payoff is still great.

You really should check this one out. It isn’t bloody, or even really disturbing on the surface, but the content and implications upon deeper analysis prove why it is so celebrated.