CLASSIC DOCTOR WHO ON BRITBOX – Attack of the Cybermen 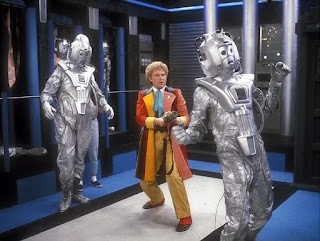 On 26th December 2019, 627 pieces of Classic Doctor Who content were made available to Britbox subscribers. Every Sunday in 2020, our Doctor Who expert, Tony Cross, looks back at some of the classic stories. Today is the Sixth Doctor adventure Attack of the Cybermen...

﻿Attack of the Cybermen annoys me. It has an excellent cast playing - generally - interesting characters, the dialogue is generally pretty good, and I like the Cryons. But...but it has the same bleakness that Resurrection of the Daleks does and is directed by the same director, Matthew Robinson) and to me does not feel 'right'.

I understand the arguments often trotted out by Eric Saward - the then script editor - that violence has to be shown to hurt but there's a difference between that and a desire to kill everyone to prove a point about making things seem realistic. Doctor Who is not meant to be realistic or pessimistic, at least to me. And as character after character is killed off it just seems gratuitous and cruel. I suspect that is might be the point, but I do not like it. It is just nasty. Particularly so in the case of the deaths of Bates (Michael Attwell), Stratton (Jonathan David) & Griffiths (Brian Glover), which are totally unnecessary. What harm would it have done to the story if they had got into the timeship and escaped? Eric Saward talks about it as 'poignant’, but it is not. It is just nasty. The bathos comes from Lytton's death and the Doctor's misjudgement of him (although as Lytton spent most of his previous meeting with the Doctor killing people is that really unexpected).

Anyway, that is my rant over.

Actually, there is another little rant: Peri's costume at the beginning of the story. A bright pink leotard and shorts. It is not exactly practical, even if it is pleasant to look at. Indeed, for once you find yourself NOT looking at Colin's jacket. However, you do think someone in the production team - JNT I am assuming - is trying to work out how little clothing he can put Nicola Bryant in before someone complains. It is almost a relief when on reaching Telos the Cybermen get her some warm clothes to wear. [This may be a sign I am getting old.]

Overall though this story is not bad. The Cryons could have been better designed: the plastic is all a bit too obvious, but I quite like the idea of them, even if their nails seem a tad impractical for guerrilla warfare. Their addition to continuity (after all where were they in Tomb?) actually does not seem too harmful and the actresses playing them all do a fine job. They get some good lines.

The cast is excellent: Maurice Colbourne is magnificently dry and nasty as Lytton; Brian Glover as Griffiths seems surprisingly 'real' for a minor Doctor Who character. He sounds like a normal bloke if a bit dim and his reactions to Lytton's insults are lovely. Terry Molloy does a good job playing the slightly bland Russell. Michael Attwell is quite scary as Bates, bullying the slightly wet Stratton and shouting a lot. But effectively. There is a difference between the Attwell type of shouty acting and (to pick an example at almost random) the Prentis Hancock style.

Colin Baker is great again. I do not have a problem with his killing various Cybermen because what was he supposed to do, talk to them sternly? He gets some great scenes with Colbourne and the Doctor's reaction to his misjudgement of Lytton is nicely played.

Peri - costume aside - is a bit annoying in Part One is a bit whiny and Tegan-esque but improves as the story goes on.

Oh, a quick mention of the terrible cliff-hanger at the end of Part One. All that no, no noing is really silly and badly directed.

Actually, I should also mention that we are now in 45-minute episode territory, rather than 25 minutes and it does feel quite nice. There is no desperate dash for a cliff-hanger all the time, which allows the writers to develop characters more, especially as unlike 'New' Who the stories are always more than one episode & can breathe a bit.

I was about to say that this is a good script but not that enjoyable to watch but then I remembered the amount of continuity. Did the general viewer understand all the references to Telos-Mondas? Did you really need to cast Michael Kilgariff as the Cybercontroller just because he had played the part in The Tomb of the Cybermen? In the decade or so that had passed the Cybercontroller has put on a few stones, obviously & it looks silly. It is like being force-fed the history of Doctor Who, especially early in Part Two when the Doctor, Peri, Lytton, and Griffiths take part in a lecture on Cyberhistory. I am surprised David Banks did not take part.

So too much continuity, too bleak and one silly cliff-hanger but not terrible. Just annoying. To me.