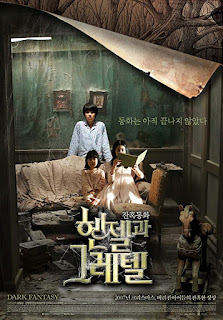 We love Halloween here at The DreamCage and we love the countdown to it even more as, every day in October, David Ames opens a window (well, writes an article) in his Hallow-vent Calendar of Asian horror films. His choice for Day 24 of Hallow-vent is Hansel and Gretel ...
Find the full calendar for Hallow-vent 2020 here. 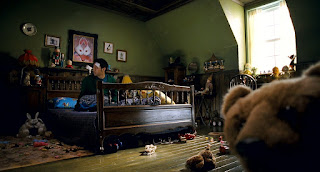 Children’s tales are an interesting group of stories. While most are usually innocent sounding, and carry a certain nostalgia that we treasure, when examined, they are often dark and sometimes violent. Today’s film is based off the classic Grimm's fairy tale and that name, Grim, couldn’t be more appropriate. Today we look at the insanely awesome South Korean mind-trip that is Yim Pil-sung’s 2007 horror film, Hansel and Gretel.
While driving down a deserted highway and arguing with his pregnant girlfriend, Eun-soo gets into an incredibly violent car accident. Unaware of his surrounding, he stumbles through the woods before losing consciousness. When he awakes and tries to find his bearings, a young and angelic girl named Young-hee comes through the woods, and leads him to her strangely beautiful and serene home in the middle of the woods.

When he enters, Eun-soo is introduced to Young-hee’s parents, as well as her older brother Man-bok, and younger sister Jung-soon. They seem to be a delightful family, and the house is brilliantly decorated with bright colors and a large amount of light. After a night’s rest, Eun-soo goes to the table and is treated to an extraordinary meal. We see immediately that something is off, but Eun-soo doesn’t pick up on this just yet. He leaves for the road, but after a day’s walking, he ends up right back at the home.

When he awakes one day, he realizes that the parents have left, and asked him to care for the children. Another attempt to leave leads him back again to the house, and Eun-soo starts to see that something is not right with the family, and especially with the children. When he discovers that those parents were not the real parents of the children, he discovers that the children may be far more powerful than he originally though, and after another couple appears from the woods, things begin to take a dark turn.

As before, I can’t reveal anymore, but I can say that, out of all the films I have watched this October, this was one of the most interesting, and well-executed. It is beautiful to look at, and it takes a classic story we are all aware of, turning it on its head, and given back to us and a haunting fairy tale much more disturbing than the original.

All of the performances are strong, but Shim Eun-kyung as Young-hee is a true standout. She is beautiful and angelic at some points, and melancholy and disturbing at others. She becomes the true soul of the film in a lot of ways, and is also the crux for the climax and eventual end of the story.

The writing of this film was spectacular. The ideas and turn on the story, and how it ties all together in the denouement, also tying in classic characters like Santa Claus is like an amazing acid trip of a film. It reminds me very much of The Imaginarium of Dr. Parnassus in the look and feel of the material.

This is a must watch, right up there with The Wailing. It may qualify as one of the best of the year for me, and maybe even one of my favorite Asian Horror films ever. It is so unique and executed so well that I went back and watched it again, right after I finished the first viewing. You are doing yourself a disservice if you don’t check this one out.