Film – The Devil Has a Name 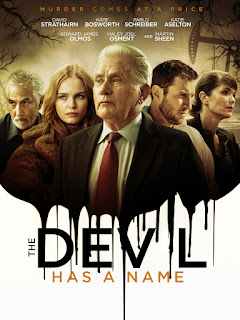 The Devil Has a Name and it is Steve Taylor-Bryant. No, actually it is the name of a drama film out now on Digital HD from our friends at Signature Entertainment and we sent Steve to watch it...

There are very few certainties in the world of film; artistic endeavours vary in style and substance so dramatically that as a viewer you can rarely be sure of what you are going to get. A film can be bad, or good, or you can be indifferent to it, entertained or angered, sometimes both, but I am here to state categorically that there is indeed one certainty in the world of film and that is this… If you give three consummate performers the script then beauty will arise from the page. In David Strathairn, Martin Sheen and Edward James Olmos you have three of the best actors that have set foot on set in the past four or five decades and in The Devil Has a Name all three are worth whatever it costs you financially to watch the film. Don’t get me wrong, The Devil Has a Name is by far not a perfect film, there are a couple of issues for me, but my word when any combination of those three fine actors is on the screen it is more than entertaining, it is a blessing.

The Devil Has a Name is based on true events and tells the story of an oil matriarch, Gigi (Kate Bosworth) who oversees the poisoning of a farmer’s groundwater with radiation from the tanks used when drilling in that part of California. Initially Gigi employs a local marketing executive, Alex (Hayley Joel Osment), who grew up in the town to offer this particular farmer, Fred Stern (David Strathairn) a small settlement as they want to purchase the land quietly and discreetly. What they weren’t counting on was the farmer realising his wife’s death from cancer was probably linked to the poisoned water and he employs a lawyer who had brought down corruption and dangerous practises in the motor industry in the past to fight the oil company in court. The lawyer, Ralph (Martin Sheen), knows how to slay the dragons of big business but likes to do it fairly, whilst the other side send fixer Ezekiel (Pablo Schreiber) to threaten and assault his way to victory when the legal case is not working fast enough, but when he has arrested and then deported Fred’s friend and farmhand Santiago (Edward James Olmos) things have gone too far and Fred will stop at nothing to win, including offering to lie on the stand. Meanwhile, on the other side of the court, Ezekiel and Alex, working under guidance from Big Boss (Alfred Molina), side-line and threaten to expose Gigi who, from self-preservation, fights back.

The film is essentially a legal drama about the little guy taking on big oil but with an emotional core to it, mainly provided by the supreme performances of the three aforementioned legends. The California oil and farmland scenery are stunning and Edward James Olmos, working from behind the camera as the director as well as in front of it as star, provides some real visual highlights to Robert McEveety’s words. I found the interrogation of Gigi by Big Boss and two board members back in Houston to be a little bit 1940’s overacting for my taste and the computerised graphic cutaways of the radiation moving through the water were not well made, certainly not needed and on occasion broke up tension in the film where you wouldn’t want the interruption, but here I am probably being a little picky about a film that I thoroughly enjoyed. The story was familiar and yet fresh, the pacing of the farm and courtroom scenes was perfect, adding intrigue when required and softening when needed, but what really impresses in The Devil Has a Name is the casting. Aside from the three luminaries I have already gushed over there is strength right down the cast. Kate Bosworth is suitably psychotic as the matriarch spurned, Hayley Joel Osment is a bundle of drug fuelled energy that delights as much as he sickens, and Pablo Schreiber is suitably menacing throughout.

Real life David vs Goliath stories don’t always transpose to screen well, nearly all the stories, as here, end in settlement with both sides claiming a victory and courtrooms are rarely full of entertainment or drama in real life but there is such a clarity of purpose to the narrative in this film that you find yourself gripped and really want to Fred to win in the end despite maybe not thinking he deserves it throughout the film and that is some great writing performed in a spectacular fashion. The Devil Has a Name is not a film for everybody and I get that, I am pleased by stories like this and love the complexities of a court case but know that is not everyone’s cup of tea, but if you are like me in your tastes there will not be many better ways to spend your time.
Follow Steve on Twitter @STBwrites