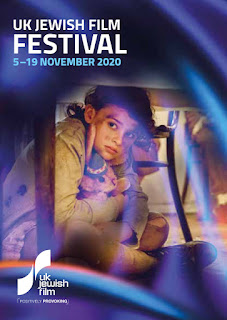 UK Jewish Film has announced its programme for the 24th UK Jewish Film Festival, which this year runs from 5th-19th November and is available entirely online...

This year will see the UK Jewish Film Festival run entirely online, offering audiences nationwide not just another spectacular programme exploring Jewish life, history and culture but also a unique festival experience from the comfort of their own sofas. With a packed Programme, the Festival comprises 73 feature-length and short films, including 46 UK premieres, as well as Q and As, discussions, and how-to tutorials with directors, actors, technicians and journalists.

Following the first ever National Tour in 2019 where UK Jewish Film screened in 23 towns and cities, often reaching those in smaller Jewish communities for the first time, the 2020 Festival aims to capture both Jewish and non-Jewish communities, wherever they are. To increase accessibility, UK Jewish Film are inviting audiences to enjoy the entire Festival with a single pass for just £35 - the same cost as three physical cinema tickets - as well as having the option to book and stream individual films.
Michael Etherton, Chief Executive of UK Jewish Film said, “a closed box office and a silent auditorium is a sorry sight for any passionate cinephile, but for an organisation championing independent films, it is especially painful. That’s why we are determined to make this year’s UK Jewish Film Festival one which brings people together through our first ever fully-online festival. Although we are delivering the festival entirely online this year, the quality of films is stronger than ever and we are excited to offer an astounding programme of international films which cover Jewish life and stories.”

Judy Ironside MBE, Founder and President added, “we are enormously proud of UK Jewish Film, our team and this year's Festival, which is presented in adversity and with huge elements of change. The films are internationally acclaimed and once again, our guest speakers join us to enhance and illuminate the films, the topics and their star qualities. When I think about ‘rising to the challenge’, I could not ask for more, and I would like to add a huge thank you to the filmmakers, celebrities and to our incredible UK Jewish Film Festival team, loyal supporters, our Chairman and Boards.”

Films can be viewed on UK Jewish Film’s secure festival platform and watched in a variety of ways on their TV using Apple TV, Amazon Fire stick, Chromecast or the Roku App. To ensure the best cinema-at-home experience, films will be premiered at specific times and dates throughout the two-week duration followed by Q&As, discussions and tutorials, and will remain available for a set time period.
In addition, UK Jewish Film have partnered with Curzon Home Cinema this year offering a specially curated collection of 6 films on Curzon Home Cinema, which are not included in the Festival Pass. Single tickets for individual films and screenings are also available.

Films at the UK Jewish Film Festival continue to reflect the absolute diversity of the Jewish experience.

A number of this year’s films reveal fascinating and little-known stories during the Second World War.

• Black Mercedes is a film-noire-esque detective story set against the backdrop of Warsaw in 1941
• An Irrepressible Woman, set in France in 1940, tells the true story of a Jewish woman who is willing to sacrifice everything for the man she loves.
• Danish/German film, Winter Journey, deals with a Jewish man’s escape from Germany
• A Call To Spy tells the inspiring story of female spies during the conflict.
• The Garden of the Finzi-Continis is a wistful and devastatingly sad film which focusses on a Jewish family in Ferrara, Italy, as they try, unsuccessfully, to insulate themselves from the slow build of fascism. UK Jewish Film is proud to celebrate the 50th anniversary of this classic film.

Modern day Jewish life is depicted in many of the films from Israel which include the impossibly gory horror flick, Happy Times, 15 Years, which deals a gay man’s mid-life crisis, Golden Voices, which tells the story of two well-known Russian voiceover artists who move to Israel just as the Gulf War breaks out and Asia, a sensitive debut film by Ruthy Pribar, which focuses on a mother dealing with her teenaged daughter’s degenerative disorder.

In these difficult times, UK Jewish Film is proud to offer light-hearted films that take Jewish humour to the next level. Six classic comedy films include It Happened In St Tropez (2012), A Matter of Size (2009), and 5 to 7 (2014). 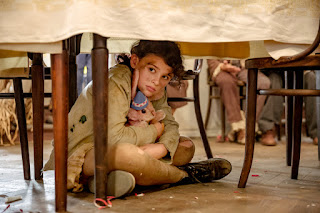 GALAS
The Opening Night Gala is the UK Premiere of When Hitler Stole Pink Rabbit. This gripping, touching and often moving film looks at the Second World War through the eyes of a young Jewish girl whose family are attempting to escape Germany. Based on Judith Kerr’s beloved semi-autobiographical book, When Hitler Stole Pink Rabbit superbly captures both the growing Nazi threat and the magic of childhood.

The Closing Night Gala is the Israeli film, Honeymood. Arriving at a deluxe hotel suite after their wedding, Noam and Elinor expect an unforgettable night. What comes next is indeed memorable, but for all the wrong reasons. A lovers’ fight leads to a late-night wandering and a series of bizarre encounters on the streets of Jerusalem. Romantic and funny, Honeymood is director Tayla Lavie’s follow-up to her smash hit Zero Motivation.

The Centrepiece Gala is the UK Premiere of The End of Love, a sensitive and compelling drama about a young married couple. Having fallen in love with Julie, Yuval moves from Israel to Paris to be with her and the two get married. When his visa expires, Yuval returns to Israel, communicating with his wife and baby via Skype. But instead of bringing them together, this new form of interaction only reveals the doubts they harbour about the future of their relationship. Starring Judith Chelma, who Festival Goers will remember from her memorable performance in last year’s Opening Night Gala Film, My Polish Honeymoon.

As always, the values of inclusivity and diversity frame the Festival’s artistic decisions and vision. Three films in the main programme deal with LGBTQ+ issues, including the UK premieres of documentaries about same-sex parenting (Double Income Kids) and transgender young people (TransKids).

UK Jewish Film is proud to offer the UK premiere of the 2020 film Aulcie, which looks back on NBA star Aulcie Perry’s fascinating life, which saw the US basketball player moving to Israel and winning championships with Maccabi Tel Aviv, returning to the US where he went to jail, then heading back to his adoptive country where he is now a bona fide national treasure.

The Festival is proud to celebrate the work of female directors. All three of the gala films are directed by women (Caroline Link, Talya Lavie, Keren Ben Rafael) and of the six films which are up for the Dorfman Best Film Award, half are directed by women.
DORFMAN BEST FILM AWARD

UK Jewish Film continues to support a new generation of creative talent, and, once again, has commissioned and produced two new British Shorts through its Pears Short Film Fund.

The Schnoz (staring Maureen Lipman and Helen Lederer). When Lydia’s grandma gives her a cheque for a nose job for her 21st birthday, it feels like a dream come true. That is, until she finds herself face to face with the ghost of her Great Grandmother, whose nose she has inherited. A kitsch tale of beauty - inside and out.

Eshet Chayil. Following the loss of his son in childbirth, a religious student longs to restart his family, but in order to reconnect with his distraught wife, he will first have to acknowledge his own hidden pain. The film is a journey of self-discovery and a study into how grief can deeply affect a relationship.

The 2020 Festival also sees the launch of two TV series:

Muna (8 episodes, 30 mins each) is about an Arab-Israeli photographer living in Tel Aviv. Chosen to represent Israel in a prestigious exhibition in Paris, her career reaches new heights, but as a result of her new-found success she also becomes the target of vicious criticism.

Nisman (6 episodes, 52-60 mins each) is a major documentary series in Spanish which focuses on the 1994 suicide bomb which exploded outside the Jewish Community Centre in Buenos Aires. 21 years later, Jewish Prosecutor, Alberto Nisman was found dead hours before he was due to testify against former President, Cristina Kirchner, whom he had accused of covering up Iran’s culpability.
Find out more about the whole festival programme and book Tickets at ukjewishfilm.org. Festival pass: £35.00, TV Series: £15.00. Single Gala Films: £15.00. Single Films: £7.99. Short Film Programmes: 0.99p each. Members discount: 20%