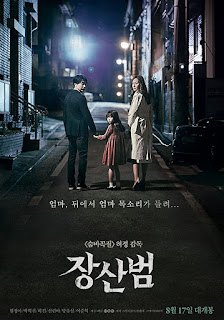 We love Halloween here at The DreamCage and we love the countdown to it even more as, every day in October, David Ames opens a window (well, writes an article) in his Hallow-vent Calendar of Asian horror films. His choice for Day 23 of Hallow-vent is The Mimic ...

Family tragedy seems to be a ripe fruit for harvest when establishing effective horror films. Movies like The Conjuring, The Exorcist, Rosemary’s Baby, The Shining, and so many others deal with internal drama and suffering within a family, and those settings provide ample opportunities for us to get attached to characters. Today’s film deals with the loss of a child, and the effect this can have on a mother and father. Today we look at the 2017 South Korean Film by director Huh Jung: The Mimic.

This film opens with a psychotic man murdering his wife and a dog while his girlfriend watches, horrified, before breaking into a walled-up mine and hiding the bodies. When he does this, he hears a strange voice calling out from within. This little prologue sets the stage for the rest of the film.

Then we are introduced to a small family: Mother Hee-yeon, Father Min-ho, and daughter Joon-hee. Recently, the family’s young son has gone missing, and although the mother holds out hope, there has been no leads, and the father has given hope, instead believing the son to be dead. The family’s grandmother is suffering from some sort of dementia, and to help her, instead of keeping her in a home, the family moves her back to her childhood home in Mt. Jang.

Right away, we realize it is the same area where the film begins, and when the grandmother begins to hear voices calling from the woods, we begin to understand the premise of the film and the title. When a young girl and boy come by looking for their dog, they believe they hear it calling from those same woods, and when they venture to search for the pet, they stumble across the brick structure where the psychotic man dumped his dead wife’s body. The girl is attacked, but escapes.

Seemingly out of nowhere, a young girl appears, and feeling a strong maternal protectiveness over the girl from the woods, Hee-yeon takes her in, bathes her, and genuinely takes care of the child. After a few days, the child begins to address her as mother and Min-ho as father, and exhibits strange behavior like mimicking Joon-hee’s voice perfectly. When a strange, blind woman appears and warns the family about the woods and the existence of evil nearby, the family must fight to survive and keep each other safe from the woods, and also from those they thought to trust.

I don’t want to reveal too much more, but I can say that I genuinely enjoyed this film. It is, once again, beautiful to look at, showing that South Korea has a lot to offer the film world, and especially the horror genre. The scares aren’t abrupt but they are unsettling, and when the truth about the situation is finally revealed, we are greeted with a grim and grisly visage that is both terrifying and arresting.

Like a few other horror films we have talked about this year, this movie is based on a folktale, and that premise bleeds through the content wonderfully. I wonder often about whether being from this culture would help me to be impacted by the story, but honestly the cultural otherness is part of the appeal for me. I love these legends from different cultures, and the deep-seeded myths that tend to permeate deeper than skin or words. They become perspectives.

None of the performances are transformative, but they are all serviceable to pull off the film well. They aren’t necessarily bad, but we aren’t given a real standout performance. They are all good, but just that.

If you get a chance to watch this film, I would definitely recommend you do. It is slow-paced, but worth the trip, and the reveal, and somber ending, truly add to the power Huh Jung was able to imprint on the film.