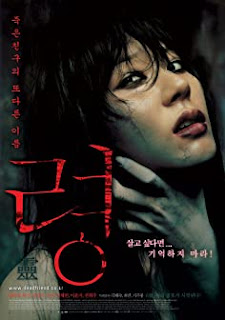 We love Halloween here at The DreamCage and we love the countdown to it even more as, every day in October, David Ames opens a window (well, writes an article) in his Hallow-vent Calendar of Asian horror films. His choice for Day 26 of Hallow-vent is The Ghost ...
Find the full calendar for Hallow-vent 2020 here. 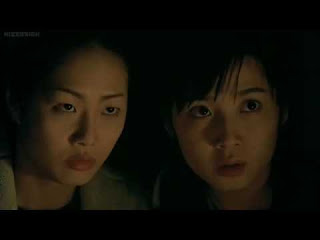 We have all seen those, at this point, classic horror films that begin with a group of high school students that eventually become hunted by something or someone. It was basically the roadmap for mainstream horror in the 90s and early 00s. Parallel to the American horror fodder that I was used to, unbeknownst to myself, South Korea was doing the same, beginning with the Whispering Corridors series, and, like the American genre, exploded with hundreds of similar stories and concepts. Today we look at one of the films from that era: Kim Tae-gyeong’s The Ghost (also known as Dead Friend).

This film begins as so many from this time do: a group of high school girls are messing with a Ouija board, jokingly summoning a ghost, but their fun is interrupted by an older sister forcing them to quit. As a joke, the younger sister says she hopes the ghost takes her sister. In the next scene we see just this happen.

Years later, we see a young woman named Min Ji-won, who suffers from amnesia, and cant remember anything major about her past. She is a sophomore in college, and a loner, who lives with her mother and only has one real friend: Park Jun-ho, a student who seems to harbor an unrequited love for Ji-won. As her days pass, Ji-won begins to experience nightmares about a ghost, and strange ties to a water haunting, although Ji-won herself is an accomplished swimmer.

One afternoon, Ji-won is confronted by a strange woman named Yu-jung who claims to have been her friend in high school. She warns Ji-won that “Su-in” is coming for them all. Ji-won’s memory begins to return, and she remembers that she, Yu-jung, another girl named Mi-kyung, and Eun-seo (the girl we saw die in the beginning) were all a part of a very Mean Girls-esque clique who was relatively awful to a poorer student, Su-in, whom they took advantage of and manipulated.

When more tragedy befalls the old friend group, and Ji-won experiences even more terrifying dreams and paranormal phenomena, she strikes out to discover what truly happened and find a way to stop it.

This film, while rather cliché in many ways, did take a turn I didn’t see coming in the end, complete with possession and a story-defying plot twist that strangely works. I can’t really say a lot for the performances. They are good for the film, but nothing truly stands out as incredible. This film simply exists in the same realm as so many others of similar ilk. The only thing setting it apart is that twist, and that alone is worth watching the film for.

If you enjoy classic Asian or American horror and aren’t looking for anything mind-bending or hard to follow, this is a good choice. It is a solid piece of horror that doesn’t reinvent the wheel, but does add another spoke.