CLASSIC DOCTOR WHO ON BRITBOX – The Two Doctors 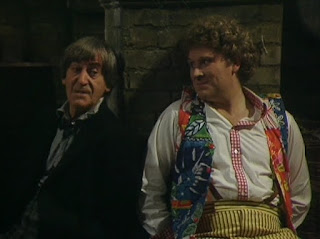 On 26th December 2019, 627 pieces of Classic Doctor Who content were made available to Britbox subscribers. Every Sunday in 2020, our Doctor Who expert, Tony Cross, looks back at some of the classic stories. Today is the Multi Doctor adventure The Two Doctors...

I like The Two Doctors. Yes, there are one or two issues but on a basic 'is it fun, does it work' level this is good.

With location work in and around Seville, it feels and looks a little different to your average Colin Baker story, although I would argue that the director doesn't take as much advantage of the locations as he might. The city of Seville itself ends up functioning more like a set of corridors for the cast to run up and down and the total Spanish contribution to the cast runs to two actors: one of whom is just the poor chap playing a here today knocked unconscious tomorrow lorry driver.

It is good to see Patrick Troughton and Frazer Hines back and the ease by which they slip into their old roles is nice to see. They both seem to have a lot of fun. Patrick Troughton and Colin Baker work together well, in the limited number of scenes they have together. It is a shame there were not one or two more.

Nicola Bryant gets even less to wear than usual and I am beginning to get a bit tired of the semi-constant bickering between her and the Sixth Doctor. It is like watching a long, drawn-out EastEnders plotline that we all know will end in tears. I am beginning to feel a bit sorry for Nicola Bryant who is suffering from the fate of many a Doctor Who companion: underused and under directed.

The guest cast is good. Although apropos my comment in Mark & The Rani about Gary Cady & Brass it seems bizarre to see James Saxon playing the ill-fated Oscar Botcherby in a style not adjacent to his Brass character Morris. The fate of Oscar is one of my issues with this story.

Once more a likable, harmless character seems to have been introduced purely for the purpose of giving him a miserable and meaningless death. By the time Shockeye kills Oscar we already know how nasty and cruel the villains are. Oscar's death is just an unnecessary piece of point proving. It is as if the production team has decided that the lesson viewers need to learn is that a universe is a bleak place and people die for no good reason. Well, perhaps we watch Doctor Who to be reminded that despite that there is joy, goodness, optimism, and fun out there too. That if we wanted bleakness and misery, we could get that at home, in school or at work thank you.

Then there is the Sixth Doctor's continuing penchant for the James Bond-esque post-death witticism. I said in my Vengeance blog that it was the flippancy I objected to & I still do. Colin Baker - in the Vengeance commentary - argues that the Doctor is an alien & his response to death might not be the same as ours & to a limited extent, I agree. But alien though he is the Doctor rarely takes death as flippantly as this. Even the death of an enemy. Colin Baker is fond of using the word "right" about the Doctor (and it is one of the best descriptions of the Doctor there is). The Doctor, to paraphrase Colin Baker, sees the "rightness of things". The Sixth Doctor's response to Oscar's death seems "right" to me, but not his response to Shockeye's death.

I am not saying the Doctor should always win or that no one should die. After all, Adric's death had a real impact but would the effect have been as strong if for the previous six or seven stories lots of good people were being bumped off. The Doctor's rare defeats or pyrrhic victories have more impact because the series is generally optimistic and positive.

But I have hammered on about this long enough and it makes me sound as if I didn't enjoy The Two Doctors, even though I did.

The guest stars do a sterling job: Laurence Payne as Dastari does an excellent job with that most Doctor Who of roles: the scientist blinded by his own ambition. The wonderful Jacqueline Pearce plays Chessene, the augmented Androgum. Her portrayal of Chessene is not dissimilar from Servalan if we are honest but as Pearce is so brilliant in that role why quibble. I have already passed a comment on James Saxon's Oscar. He is ably supported by Carmen Gomez as Anita, who functions as Oscar's conscience and courage.

Best of all though is John Stratton as Shockeye. He - forgive the pun - really gets his teeth into the part, skirting but staying on the right side of hammy and at moments being really terrifying. The Androgums are a nice addition to the Doctor Who universe and could pop up in the new series quite comfortably.

I also wonder if there are a series of adventures involving the Androgum Inheritance that we've not seen in which the post-Troughton Doctors get influenced by the operation to turn The Doctor into an Androgum. A bizarre series of food-related adventures where The Doctor and his companions arri...sorry, I am getting carried away again.

My final quibble is about The Sontarans. They are amusingly written by Robert Holmes as militaristic buffoons who Chessene runs rings around, which is fine, but you do not want to undermine your own monsters do you? Especially at a time when the series is struggling for credibility. They are also a bit tall but that is a ridiculously Ming Mong-esque complaint.

So in the end, despite my (significant) quibbles I do like the Two Doctors. It is entertaining & enjoyable stuff. The first episode in particular is exceptionally good.

Oh and before I forget, Colin Baker's monologue in Part Two after Peri's left on the impending end of the universe, which I'm going to hereafter call the "Never More A Gumblejack" speech, is lovely. It proves - to me at least - that there was much more to Colin Baker's Doctor than he is often given credit for.