CLASSIC DOCTOR WHO ON BRITBOX – The Mark of the Rani 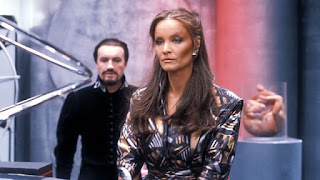 On 26th December 2019, 627 pieces of Classic Doctor Who content were made available to Britbox subscribers. Every Sunday in 2020, our Doctor Who expert, Tony Cross, looks back at some of the classic stories. Today is the Sixth Doctor adventure The Mark of the Rani...

Mark of the Rani is not all bad I will give it that.

Kate O'Mara is excellent as the Rani and the character is a breath of fresh air. She is contemptuous of the Master's 'devious and complicated' plans and the Doctor's morals. She mocks the Master's fight with The Doctor with panache. But then they go and team her up with The Master.

Now The Master is an idiot in this story & you wonder why the Rani just does not kill the skulking fool and get on with it. The Master also appears to have disguised himself as a Scarecrow and stood in a random field to await the Doctor's arrival. Now, why would he do that? Why? Then he ditches the scarecrow disguise & is back in his 'I'm off to do evil things' outfit as soon as possible.

All the Time Lords in this story get to do some dressing up. The Rani as an Old Crone, The Master as a bloody Scarecrow and the Doctor (temporarily and unconvincingly) as a workman in need of a bath. Colin Baker's impressive mop of blonde curls should have put the kibosh on that disguise straight off and why it takes the Rani two minutes to suss it is the Doctor whilst he is unconscious is beyond me.

Then there are the accents. I am assuming this is supposed to be set in the north-east somewhere - after all Stephenson's from Northumberland by birth - but some of the faux Geordie-Tyke-whatever is bloody appalling. And some of the minor actors are pretty terrible but given that most of the time they are given little to do except shouting a lot and rage rather unconvincingly I do not think they can take much of the blame. But if I hear another pseudo-Geordie mention of 'Toby’s' I might just smash something up.

But I must remember that this is not all bad. Colin Baker is excellent - again. I like his mischievous glee when he gets a chance to have a go at the Rani's TARDIS. So too is Terence Alexander as Lord Ravensworth and Gawn Grainger as Stephenson. Gary Cady as Luke Ward is a bit difficult to take seriously if you have strong memories of the rather wonderful Brass but does a reasonable job of a pretty bland part.

The fact that a lot of the story is filmed on location in Shropshire helps too. The opening shot, in particular, does a fantastic job of setting the scene and period. It is all rather refreshing but once again when one moves into a studio in a story like this it often feels and looks studio-esque. The change from film to video being part of the reason.

However, the location filming does not excuse one of the most pathetic pieces of special effect in Doctor Who's long history. I am talking about the 'Luke Tree' saving Peri. The idea of the Rani's clever little mines is one thing but it is at moments like this you wonder why someone didn't say: "Look this Luke Tree branch thing...it's going to look bloody ridiculous unless we have time and money to do it properly. This is Doctor Who, so we will not have either. Let us write something else." But no. So, we get a very plastic-looking tree fondling Peri. Then we get two big plastic-looking trees supporting an uncomfortable-looking Colin Baker. It's like someone has gone: "So you've suspended your disbelief thus far. Let us see how you feel after THIS. No... what about THIS. HaHaHaHa etc"

It's a shame really because the writing in this story isn't too bad. Pip and Jane Baker get a lot of flak, but it is not too badly written this story. It is too 'busy'. Why have the Master and the Rani when one will do? In fact, since you've apparently killed off the Master once & for all - something the Rani seems to know about btw. How is this? Do they have a Time Lord Twitter? Bringing him back makes this story too crowded and in comparison, with the Rani the Master ends up looking like a total twonk. He is less Moriarty, more Sylvester Sneaky.

So if you ignore some terrible accents and acting, a surfeit of Time Lords, the terrible Luke Tree, The Master's stupidity this is not entirely bad. It is not that good though. Go and watch Vengeance on Varos again. It is much more fun.