CLASSIC DOCTOR WHO ON BRITBOX – Vengeance on Varos 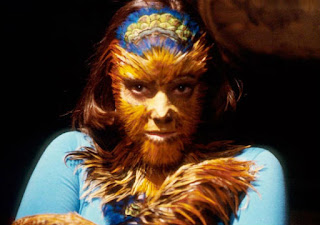 On 26th December 2019, 627 pieces of Classic Doctor Who content were made available to Britbox subscribers. Every Sunday in 2020, our Doctor Who expert, Tony Cross, looks back at some of the classic stories. Today is the Sixth Doctor adventure Vengeance on Varos...

﻿ I love Vengeance on Varos, although watching again it is clear that the first episode is far stronger than the second.

It might be studio-bound but that's because it is effectively set in a television studio where some rather unpleasant games take place. Varos is a former prison colony that has adopted trial by television as the main driver of its constitution. The Governor rules as long as he can survive the votes of his population. It is as if Simon Cowell had been allowed to create his own government: rule by reality television.

Criminals on Varos are punished by live execution. The videos of which are exported to other planets for the enjoyment of people who like that kind of thing. It is not a pleasant planet to live on. Life - to use an old cliche - seems nasty, brutish and short. Part of the reason for this is that the people of Varos have no idea that they are sitting on a gold mine...well not a gold mine but a Zeiton 7 mine. Zeiton 7, a miraculous McGuffin of the week, is an important mineral required for time-space machines the universe over. Somehow the Varosians have missed this fact & have allowed themselves to be robbed by the Galatron Mining Corporation.

The envoy of the Galatron Mining Corporation is Sil, who is a fantastic creation. He is played with gurgling brilliance by Nabil Shaban. Shaban makes Sil one of the most memorable monsters of the 1980s, partly because he is a rare new addition to the list of Doctor Who enemies and partly because he is so well-acted and designed. Sil's laugh is particularly memorable but so is his sadistic glee, deviousness, and cowardice.

Shaban is not the only excellent performance though. Martin Jarvis as The Governor is also great. What sometimes gets forgotten is that the Governor is not that pleasant a man. He might just be doing his constitutional duty, but this is a man who oversees the murderous day-to-day life on Varos. Yet Jarvis makes him seem sympathetic, especially at his most tired and weary. But his stand-off with Peri, where she dismisses him with the line “and I thought you were better than the rest of these brutes" shows the fine moral line between the Governor and his compatriots. He is also nicely underplayed. No histrionics required.

Also, Forbes Collins does a fine job as the corrupted and devious Chief Officer.

Jason Connery as Jondar is a bit wooden but I'll forgive him that as apparently it was his first-ever television but still, he does look a bit all at sea when most around him is actually jolly good. Owen Teale, a fine Welsh actor also appears as Maldak. Oh and I bit of a minor boo for Nicholas Chagrin as Quillam who - with the exception of two elderly nappy wearing cannibals - is the most over-the-top person in a story that doesn't really need them.

What I think makes this story excellent is the way it is both a Doctor Who story & a commentary on television. There is a chorus - watching at home - in Arak (Stephen Yardley) & Etta (Sheila Reid) who occasionally comment on the action & the cliff-hanger at the end of Part One is marvellously post-modern. The Doctor's dying & we hear the Governor & his team giving direction on how to film the scene and it is one of my favourite Doctor Who cliff-hangers ever.

As I said at the beginning though Part Two is less effective. The ending is a bit rushed & overly convenient. And again - after Attack of the Cybermen - the Doctor seems to choose the path of violence over peace by organizing the deaths of Quillam and the Chief Officer through poison, which does not feel quite right. Neither does his post-acid bath James Bond-esque quip. It is just a bit flippant. I do not have an issue with violence, even realistic violence but I do have a bit of issue with it being treated flippantly.

However, despite the quibbles, I think Vengeance on Varos is a fine story. Colin Baker is excellent, Nicola Bryant who - in her words from the DVD commentary is 'in another leotard, another day - is also fun, even if she doesn't get a great deal to do this time.

It's worth watching though and is definitely the best Colin Baker story (so far).