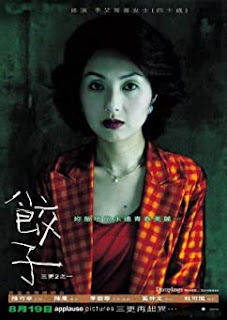 We love Halloween here at The DreamCage and we love the countdown to it even more as, every day in October, David Ames opens a window (well, writes an article) in his Hallow-vent Calendar of Asian horror films. His choice for Day 27 of Hallow-vent is Dumplings ...
Find the full calendar for Hallow-vent 2020 here. 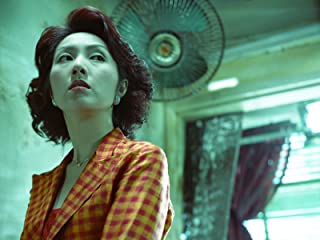 I have been meaning to watch today’s film for some time. I have seen it on numerous best horror lists, and the cover art was interesting. I avoided reading about the premise because it looked so strangely interesting, and I wanted to cultivate that mystery instead of ruining anything by spoiling the story for myself. I understand now why this film has made it to all of those lists. Today we are looking at the 2004 Hong Kong film from director Fruit Chan: Dumplings.

A former actress named Mrs. Li is losing her youth and beauty, and struck and concerned by her husband’s less than veiled infidelity with a very young masseuse, she strikes out to find a way to maintain her beauty and youth, and hopefully recapture her husband’s eye. In her search, she stumbles across a woman known as Aunt Mei who is famous in the underground for the rejuvenating power for her dumplings.

Mrs. Li is at first disgusted when she discovers what the secret ingredient is, but when she begins to see small progress, she returns again and again to Mei, becoming obsessed with regaining her youth and her husband’s attention. After pushing and pushing for better quality ingredients for the dumplings, Mei finally delivers and the impact on Mrs. Li is almost instantaneous. Her libido returns, as does her youthful beauty, and she does indeed reignite passion with her husband.

When she develops a strange smell, and her secret is discovered by her husband, strange events transpire that set the end in motion. The denouement of this film is so shocking and the implications made by the final scene are genuinely haunting.

This is easily one of the more, pardon my French, fucked up films I have ever seen. The way that the director and the performers treat the subject matter is to be commended, considering the brutality and total disregard for decency their characters have. That very last scene is especially haunting.

All of the performances are relatively solid, with a special mention in Bai Ling as Aunt Mei. She has a strange quality that both promotes strength and wisdom while also portraying an undercurrent of far out evil. She is remarkable in this, and I haven’t been as impressed with her since 1994’s The Crow.

If you find yourself in need of something strange, quirky, and incredibly fucked up, you need to give Dumplings a chance. The turns this film takes, and the frank nature Chan uses when approaching this kind of subject matter deserves attention, even if just to be horrified at its depravity.