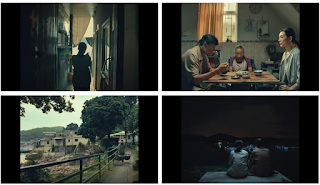 The ability for a short film to tell a whole, complex story in just over ten minutes is always surprising to me. Even more so when there is very little dialogue or action which, for a story involving the Triads, is even more surprising. I was expecting the usual action-flick fireworks of running around, shouting, bright colours and explosions. Instead I got a miniature guóhuà masterpiece of desolate, inevitable, tranquility.

A Hong Kong hitman retires as a fisherman on the peaceful Grass Island. One day, his Chinese apprentice shows up, tasked to kill him before the last ferry departs.

The first thing I must say is that this film is utterly beautiful to look at. The cinematography by award-winning Greek cinematographer Giorgos Valsamis means that every shot is as composed as a painting; the imagery of the ferry pulling away from the dock at twilight is so gorgeous that I’d hang a still of that on my wall. Also, director Linhan Zhang’s use of chiaroscuro and constraining the vista with walls, corners and corridors in shadow taking up a lot of the shots focused the attention on tiny areas of mundanity, such as a cooked fish, making these objects and actions feel of utmost import while giving the viewer the impression of voyeurism, of seeing secrets, along with a feeling of claustrophobia, of real unease. This feeling of disquiet was compounded beautifully by the lack of underlying music score, letting the burbling TV, the hum of electric fans and the constant lap of the water outside provide the only backdrop to the film right until the end when the jarring pentatonic notes of traditional Chinese strings add a sense of timelessness, history and legend to the tale.

And what a legendary tale it is. Stunningly minimal, both in mood, movement and dialogue, there is probably more said and done in what is not said and done. It uncovers a different side to both master and apprentice in unexpected ways, while leaving the viewer in no doubt as to who the real leader is. Also, the addition of the dog was absolutely inspired as it gave an even more surreal edge while adding a lighter tone to the bleak beauty of the film.

Find out more about the short film at https://www.lastferryfilm.com/