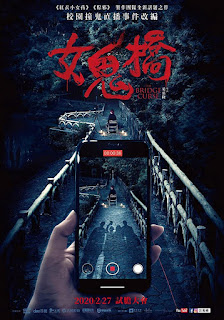 We love Halloween here at The DreamCage and we love the countdown to it even more as, every day in October, David Ames opens a window (well, writes an article) in his Hallow-vent Calendar of Asian horror films. His choice for Day 1 of Hallow-vent is The Bridge Curse ... 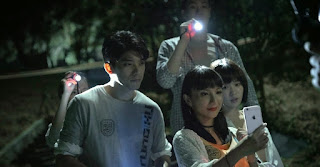 Sometimes you watch a film that is so derivative of other directors that it becomes hard to grasp the originality. Today, I watched a film that was truly a James Wan tribute, if I am being generous, and if I wasn’t, I would say the director just wanted to capitalize on his style, without coming close to that success. While not a bad film, today’s viewing does leave quite a bit to be desired. Today, we look at director Lestor Hsi’s 2020 supernatural horror/mystery/thriller (it may be trying to do too much) film The Bridge Curse.

The Bridge Curse followed five undergraduate students who plan to perform a Bravery Initiation Ritual with students from their campus. At this particular college, there is a bridge made famous because of the brutal/sad death of a woman. Legend tells that if you climb a certain set of stairs, thirteen to be exact, at midnight, counting the stairs along the way, a magical fourteenth step will appear, and whatever you do, you must not turn around while on the stairs for fear of enacting the bridge curse.

Naturally, these undergrad students do just this, and what follows is a series of clichéd and rather predictable events. The film is also attempting a concurrent, but in the present, storyline of a reporter who is working on a story surrounding the deaths of those students, which we learn actually took place in 2016. I don’t want to give away the ending or spoil any of the twists, although if you are a fan of the genre, you will unravel them about a third of the way through the film.

Overall, as a fan of the genre, I can say that this is a decent attempt at the haunting/curse film, and, especially for younger (teens to be precise) audience, this would be perfect sleepover fodder. As someone who was looking for something a little more substantial, I must say that I was somewhat disappointed.

The acting was serviceable and there are some verified scream queens in this movie. They belt out blood curdling yelps and mew whispering mutterings for salvation as well as anyone of our era does, and their performances help to buoy a cast that is, sad to say, somewhat forgettable. So forgettable that their names are inconsequential until the very end.

The storyline, and especially mystery subplot, are incredibly convoluted, so much so that by the end of the film you are on the edge of your seat less out of excitement and fear, and more out of sheer confusion. With some simple qualifying scenes and maybe an editor to really help bring home the denouement, this ending could have really elevated the film. Sadly, it becomes just another horror movie that is trying to be too smart.

Some of the horror aspects of this movie are actually done very well. Cinematography looks great, aside from an overuse of fast-forward scenes. The film really does feel at times like The Conjuring or Insidious, especially with the color schemes and composition. Unfortunately, it also relies far too heavily upon the Japanese horror trope of the single, scorned woman in all white, extremely pale, with long dark hair covering her face. When we are finally greeted with her full visage, we get something slightly different and welcome, luckily.

The special effects are pretty solid, and they do help to establish some of the successful horror elements, but once again, it seems that the film chooses CGI or camera tricks over some simple practical effects that could have been much more impactful.

One irksome point about the whole film is the weirdly boomer-ish vibe I get from the writer. There are many points in the film in which the students are using their phones (to play games, call, text, or use a flashlight), but their tech constantly fails them, in the most blatant and obvious “Technology can’t do anything – young people use it too much” way. Half the film is just weirdly saying that young people rely on their phones and they can’t live without them, which is a strange hill to die on for a horror film about a ghost.

But as per usual, I don’t want to be too dour. This film has some real moments of brilliance. The bathroom scene in which one student is drowned in a bucket is done remarkably well, with just the right use of atmospheric music and simple visuals. Another, scene done well is in a room full of manikin heads and bodies. Just the simple composition of the shots in this scene lend itself to a wonderfully creepy and tense moment.

Overall, if I had to rate it, I would say that it fits alongside other recent Blumhouse films like Slender Man or Unfriended. It isn’t bad at all, and like I said earlier, for a younger audience looking to simply enjoy some creepy scenes and a few jump scares, this film will easily satisfy. Not the greatest, but definitely not the worst by any means.