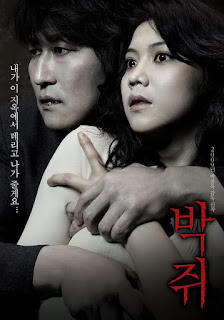 We love Halloween here at The DreamCage and we love the countdown to it even more as, every day in October, David Ames opens a window (well, writes an article) in his Hallow-vent Calendar of Asian horror films. His choice for Day 31 of Hallow-vent is ...

Well, we have done it again. We have arrived at the final day of the Hallow-vent calendar, and as I usually like to do, I believe I have saved the best for last. If you have been paying attention over the past few years, you can probably guess at what the subject matter for this final film will be. Aside from that, I have also saved the best of these celebrated directors for this final installment. I look at this man as the Korean Quentin Tarantino, but I don’t mean that in a dismissive manner. Instead what I mean is that he has established a very unique, personal style, and that his films are easily recognizable because of cinematography, writing, dialogue, character development, and humor. Today we look at a film from one of the greatest directors/writers of the past 30 years: Park Chan-wook. Today, we watch 2009’s beautifully rendered vampire horror film, Thirst.

Thirst follows the tragic journey of Catholic priest Sang-hyun, who after doubting his place and his purpose in life, decides to participate in an experimental procedure to help find a cure for the extremely deadly Emmanuel Virus (EV). After years of working as a priest in a hospital, and struggling with his inability to save anyone, he sets off for the vaccine trials. While there, he develops the disease and is on the verge of death when a blood transfusion miraculously cures him.

The locals and all of his parishioners look at him as a miracle and begin to worship him as a savior, something the humble and noble priest feels uncomfortable about. When he reunites with a childhood friend, Kang-woo, his mother, Mrs. Ra, and Tae-ju, his wife, Sang-hyun finds that he is inexplicably attracted to his friend’s wife. Unable to deal with these urges, he resorts to self-flagellation, but nothing can quell the urges.

When the priest begins to develop strange symptoms, incredible hearing, strong sense of smell, etc., and the indicators of EV begin to return, Sang-hyun discovers that by drinking blood, all of his ailments disappear. He begins to understand that the blood transferred to him was from a vampire, and that it wasn’t by his choice, so maybe it was a gift from God.

Avoiding killing, Sang-hyun begins to take blood from coma patients and those who already want to die. Along with this acceptance, he commences an affair with Tae-ju, whose husband and mother-in-law are incredibly abusive. Eventually he reveals to her what he is, and after the initial fear, their relationship flourishes, and then deconstructs in epic fashion.

It may seem like I have given you a lot of the plot, but this is really only about 40 minutes of a 2.5 hour film. This is a masterpiece of filmmaking, and deserves to be watched by any and everyone, regardless of your affinity or hatred for the genre. Park Chan-wook is a master of his craft – an auteur in every sense of the word. His style is prevalent throughout. We are treated to his beautiful cinematography, his gripping use of handheld cameras, his weird, off-beat humor, his incredible use of color contrasts, and of course, his incredibly dynamic and complex character designs.

Song Kang-ho, a regular in Park Chan-wook’s films, plays the protagonist. He is caring and sensitive, complex and conflicted. He struggles with the direction God has led him, and in the end, we see him lose his faith to an extent. Song is nothing short of brilliant, and should be recognized as such.

Kim Ok-bin, playing Tae-ju, is easily the most magnetic of the film. Yes, she is beautiful, especially after her transformation, but she is also a wonderfully dynamic character. We see her suffer, but we also see the sociopathic tendencies she has, even before she changes. She has led a hard life, and so we as an audience understand the choices she makes, but Park Chan-wook does an excellent job of not explaining away or justifying her actions. When Kim is on screen, we can’t help but watch, and she plays every scene to perfection.

The filming speaks for itself, but one scene in particular is breathtaking. Sang-hyun and Tae-ju decide to paint their home completely white, and cover it in fluorescents, giving the whole room and almost chiaroscuro quality. Then, when the carnage begins, the red is so bright and the juxtaposition adds an almost angelic quality to the picture.

You MUST see this, if you don’t see any others this year. This has been one of my favorite horror films for years, ever since my first viewing. Not only is it disturbing and funny and interesting, it is a genuine character study and an immaculately crafted piece of art.