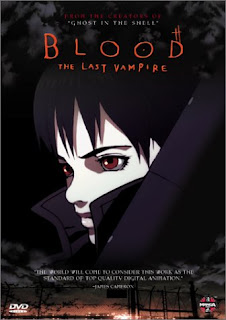 We love Halloween here at The DreamCage and we love the countdown to it even more as, every day in October, David Ames opens a window (well, writes an article) in his Hallow-vent Calendar of Asian horror films. His choice for Day 8 of Hallow-vent is Blood: The Last Vampire ... 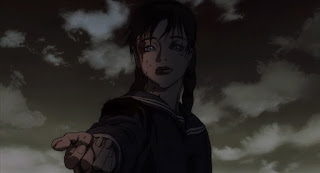 Anyone who has followed me or this Hallow-vent calendar over the course of the last five years knows my affinity for vampires. Well, obsession would probably be a better term to describe how much I love every aspect of the creatures, and basically ever iteration, from Dracula to Blade and even to Twilight. This is why, for this year, I wanted to get at least one solid choice from the genre, and so I chose the ever-awesome Japanese animation: Hiroyuki Kitakubo’s 2000 classic Blood: The Last Vampire.

This film, while incredibly short, really packs a punch, and scratches the itch of both anime and vampire fans alike. The premise of the film is that Saya, initially a seemingly innocent and helpless young girl, is actually the last original vampire. She is working with American handlers, mainly David, as she tracks down Chiropterans, bat-like creatures who can disguise themselves as humans and feed on the blood of humans. Saya slays these with a katana, and while she bears few signs of normal vampire weaknesses (i.e.: wood, holy water, sunlight), she does have a violent abhorrence for anything Christian in nature, although that seems more out of spite than out of actual aversion.

David sends Saya undercover to an America Air Force base in Japan, as they prepare for what will eventually be the Vietnam war. She must track down what they initially think is two, but turns out to be three of these creatures, hoping to stop them before they tear through the student and staff population of the base. Saya starts classes at the Base High School, where she discovers that something isn’t quite right. It appears that the creatures are using the nurse’s office as a feeding grounds.

I don’t want to give any more away, mainly because the film is incredibly short, coming in at just 50 minutes. Still, that 50 minutes is full of action and enough horror elements to satiate anyone.

The animation is beautiful, and this is the first Japanese anime film to ever blend 2D and 3D animation. The story flows well, the music is fitting, and the art style is PERFECT. If you are a fan of Anime or of vampires, or of just genuinely good action films, do yourself a favor and check out the female Blade as she cuts her way through the ranks of the monsters who prey on the living. This movie is a damn masterpiece.