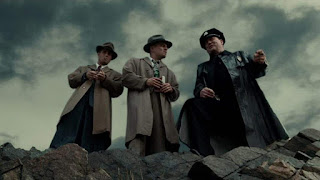 Steve Taylor-Bryant took a trip to 1950's Shutter Island,  with the 10th Anniversary edition out this week in the US on 4K Blu-Ray...

It’s been about six years since I last cast my gaze over Shutter Island, and today is only the third time I’ve watched it all, so it’s basically like watching it for the first time with the vague realisation that it has a massive plot twist. Instead of not looking forward to it because I know roughly what’s going to happen I’m going into it with what Scorsese said all those years ago ringing in my ears “this film will make double the income because people will have to see it a second time to understand what happened the first time”, well, Mr Scorsese, I’m not normal people so my apologies that it’s taken half decade and a third attempt to truly grasp what a masterpiece of psychological cinema this really is.

The implausible escape of a brilliant murderess brings U.S. Marshal Teddy Daniels (Leonardo DiCaprio) and his new partner (Mark Ruffalo) to Ashecliffe Hospital, a fortress-like insane asylum located on a remote, windswept island. The woman appears to have vanished from a locked room, and there are hints of terrible deeds committed within the hospital walls. As the investigation deepens, Teddy realizes he will have to confront his own dark fears if he hopes to make it off the island alive.

The first time I saw Shutter Island I thought it was great, clever even, but didn’t quite notice or comprehend the little nuances contained within. The second time was with people. People talk, they eat, they think a gathering is some kind of social occasion and just won’t be quiet when a movie is on so I really got nothing from the experience other than a hatred of people, but this third time I was on my own with peace and quiet and well, I don’t mind telling you, my mind was blown. There is so much about Shutter Island that demands your attention anyway but when you have the chance to concentrate on it, knowing the twist is coming so you can look outside the plot surprise, it is a remarkably rewarding experience.

The main story plays along as a taut thriller and would be enjoyable enough as it is, as most people see it after the first watch, but the secondary story that is rumbling underneath, of Teddy Daniels' possible PTSD from both the atrocities of war (the scene of the American soldiers executing the Nazi guards as they liberate Dachau is incredibly dark and tense), and the death of his wife by house fire a few years previously, is where the meat is on the bones of Shutter Island. It’s through these sad and emotional flashbacks that you start to feel for Teddy and therein lies the problem you now have before you care for him and Scorsese is about to wrench your heart out. To play a man tortured by his own demons and desperate past would be hard enough for any actor but Leonardo DiCaprio has to do that, and play the twist, and keep your attention whilst making you look elsewhere. In short, the man is not just one of the finest actors of my generation, he is a magician. The calming influence in amongst all the anxiety and stress is Teddy’s partner Chuck Aule. the always relaxing Mark Ruffalo, whose voice is like hearing a favourite lullaby, takes his usual laid-back style to the character and when you know the twist you see how important this slice of casting was. As an audience we believed that Ruffalo as a 1950’s copper but, later in the film when all becomes apparent, you see why such a calming influence was needed and just how clever using Ruffalo was. Add to the cast the always incredible Ben Kingsley as Dr. Cawley, and the always evil Max von Sydow as Dr. Naehring as the main guys at Ashecliffe and the tension is building. All the questions start getting asked, are they experimenting? Is Naehring a Nazi? Why is this hospital so remote? Are the techniques they are using barbaric or not? The one question you don’t ask yourself on first viewing is why Teddy? When you are watching for a second or third time completely aware of how the story unfolds that question answers itself repeatedly in a myriad of ways.

There have been good thrillers made before and since Shutter Island debuted, and some very good psychological thrillers over the years with twists aplenty but what makes Shutter Island stand out from all the others is the way Martin Scorsese makes a film look, adopting cinematography and camera angles that transport you to the era he is telling his story from, and how he makes a film personal to every viewer despite having mass appeal. His films make great box office returns and its very hard to find a project of his that isn’t massively successful on a global scale but every time I watch a Scorsese movie, I’m left with the idea that he made the film just for me. There are similar opinions and reviews from reviewers to his movies but every single one of us finds something within a Scorsese project that speaks directly to our souls. For me, in Shutter Island, it’s the ending. The one piece of the film not pretty close to the source material, the one line that makes that ending something different for all of us as viewers. I can't tell you too much without giving away massive spoilers which I have tried my very best to not do throughout this article as, I was surprised to learn, many of you have not yet seen Shutter Island yet let alone the required two or three times, suffice to say I have a strong opinion on what that ending means, how I see it unfold and how personal it is to me, what it said to my soul. For many of you it will be different and none of you will be wrong such is the power of the storytelling, the magic in the performances, and the style of Scorsese.

I think the studio were wrong to pull their Oscar money and place it elsewhere, sensing that Shutter Island would not perform well and moving its air date to take it out of contention. I know none of these decisions are taken lightly by studio heads and marketing teams, but I think on this occasion they dropped the ball. It may not have swept the awards, but I think it would have filled all the major categories and perhaps would have driven more awareness to the film, because this film demands more love than it received.