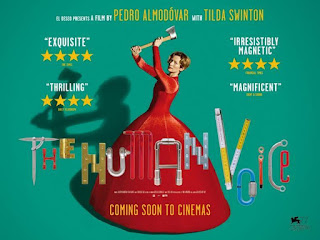 Pathé have announced that their new short film, The Human Voice, directed by Spanish auteur Pedro Almodóvar and starring Tilda Swinton, is coming to cinemas next month. Watch the trailer...

After its London Film Festival screenings this weekend, the film will be launched on 7th November 2020 at a special Event Screening in cinemas across the UK, followed by a pre-recorded Q&A with Almodóvar and Swinton hosted by film critic Mark Kermode. The Event will have repeat screenings nationwide from 8th November.

The Human Voice was shot over nine days in Madrid in July and recently premiered to critical acclaim at the Venice Film Festival. It is Almodóvar’s first work in the English language.

Madness and melancholy intersect to thrilling effect as Almodóvar reimagines Jean Cocteau’s short play The Human Voice for an era in which isolation has become a way of life. Laws of desire become the rules of the game as Tilda Swinton’s unnamed woman paces and panics in a glorious Technicolor apartment where décor offers a window into her state of mind. A short, sharp shot of distilled Almodóvar: passion, emotion, heartbreak, wit, and melodrama exquisitely bound up in a tale for our times.