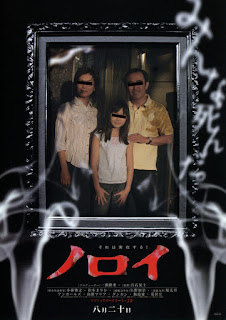 We love Halloween here at The DreamCage and we love the countdown to it even more as, every day in October, David Ames opens a window (well, writes an article) in his Hallow-vent Calendar of Asian horror films. His choice for Day 16 of Hallow-vent is Noroi: The Curse ... 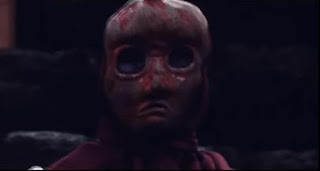 Found footage and, exclusively, documentary-style horror has been done and done, and to a point somewhat exhausted. Still, sometimes we get to experience something new or interesting; a possible bright spot in a now oversaturated subgenre. Today, we look at something that, with an incredibly low budget, pulls off this shining moment that is so rare in this type of film. Today we look at Koji Shiraishi’s 2005 Japanese film, Noroi: The Curse.

This film follows filmmaker and paranormal researcher Masafumi Kobayashi, as he unravels a strange, twisting mystery that combines classic horror ideas like possession and haunting with older mythos from Japanese folklore. The movie opens by telling the audience that Kobayashi has gone missing, and while his house burned and his wife died in the blaze, Kobayashi’s body was never discovered. Then, we are launched into the film itself, which, we are told, is the footage and film that Kobayashi was working on before the disappearance (very much like the original Blair Witch Project).

Kobayashi is seen investigating a woman named Junko Ishi, who has received constant complaints from her neighbors who keep hearing children crying. Upon investigation, it is discovered that she only has one child, a boy of about 6, and when she disappears after some erratic behavior, her apartment appears disheveled and there are dead pigeons just outside.

Next, we see footage from a television show where a young girl named Kana Yano presents evidence that she has psychic powers. Quickly after the television appearance, Yano is kidnapped. Before this happens, Kobayashi discovers that a strange, somewhat unbalanced man named Mitsuo Hori had visited the girl. He also has psychic powers, and will become a strange yet important character through the rest of the film.

While investigating these things, Kobayashi hears about another strange incident that occurred at a local shrine. Marika Matsumoto, an up-and-coming actress, was filming at the site, but afterward she discovers that strange coiled ropes of yarn are in her home. Kobayashi sits up surveillance with her permission, and it is discovered that Marika has been doing this in her sleep, without her knowledge. When suicides and strange deaths begin to occur to all the people tangentially connected with this story, Kobayashi sets along a path of discovery that eventually leads to his wife’s death, and his disappearance.

I don’t want to reveal more, because the ending comes together quite well, and when the connection is revealed between all of these seemingly unconnected events, we are treated to something special. The scope of this film far outpaces its respective genre, making this a borderline epic in documentary-style horror.

The film is very low budget, as I said before, but for what they need, this is a non-issue. The filming isn’t beautiful because it doesn’t need to be. All of the performers are believable in their respective roles, because they are perceived as everyday people. The only strange choice is the insanely eccentric portrayal of Hori, but even that makes sense in the context of the film as a whole.

This is really one that deserves a watch, if you can find a copy anywhere. It is easily one of the best documentary-style horror films I have seen, and I would place it just below the original Blair Witch Project in terms of its success and the strangely eerie scenes to which we are treated.