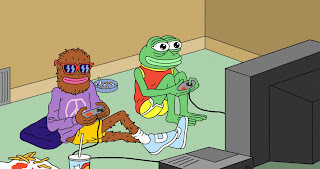 All I knew about Pepe the Frog, was that it was some sort of symbol or insignia of the Alt-Right in the US. I couldn’t fathom why, seeing as his skin was green rather than white, his name was more Latinx than Anglo-Saxon and he was a frog rather than an ubermensch and quite a lugubrious frog at that. This ninety minute BBC documentary took me along a journey step by step, as to how we get from a kids’ storybook cartoon character to being retweeted by Donald Trump on his way to electoral victory and a badge of membership for neo-Nazis.

We are introduced to the graphic artist Matt Furie, a man who is as far removed from his surname as you could imagine; sweet, gentle, quietly-spoken, deeply in love with his partner and their daughter, manifesting a hippy drop-out vibe, though he offers he has a punk sensibility. The frog is his animal motif and he created a delightful children’s book about a nocturnal frog’s journey with a companion to greet the sunrise. For his next venture, he drew a comic series about four guys continuing their college lives living together out in the real world and made them all animals, with the leader being Pepe the Frog. They were stoners, drinkers and there was lavatorial humour a plenty. Face down on the bed in a drunken stupor paints them as hedonists, but the fact that the knees and feet are on the carpet because he didn’t make it fully to bed paints them as nihilists too. The key image was when on the advice of one of his pals, Pepe discovers the joys of peeing with fully pulled down trousers as against having them at half-mast. “Feels good man” he pronounces. And thus was the seed of a meme born. 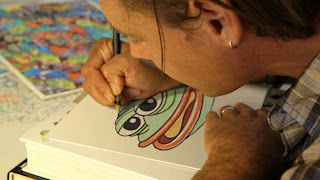 Cut to a corner of internet imageboard 4Chan. A corner inhabited by self-avowed losers and dropout males who never leave their basement rooms in their parents’ homes. They don’t like the reality that has seemingly turned its back on them, so they reciprocate by turning their back on the world. These adolescents display a nihilism of the same order of nineteenth century Russian revolutionaries like Sergei Nechayev, but would never conceive of picking up a book of their theories or going out an chucking a bomb, when they could satisfy themselves posting a picture of a cartoon character chucking a bomb. They glom on to Pepe’s “Feels good man” because it’s an easily reproducible image and this being an imageboard, primary expression is the visual rather than words. So to post something with a Pepe represents a thumbs up or a like. But they also transmute Pepe have a permanent frown, “Sad Pepe”, since that represents their default emotional state. Until the women turn up…

Pepe the Frog takes off globally to some extent, so that you get Japanese girls declaring their undying love for “pee-pee” (which matches creator Matt’s concept of the name punning on the urinary function) and look for online sites to share their love with other devotees. So they land in the basement dungeon of 4Chan and the male troglodytes don’t like it. They fight back and Pepe gets weaponised, portrayed will all manner of offensive weapons and firepower and the women are driven away off the site. Now we have angry Pepe, with no accompanying speech bubble, just an visual arsenal of hate. Enter the Alt-Right, spreaders of chaos and underminers of reality. Pepe sports tattoos and political insignia and his victims are real women, people of colour and caricature Jews straight out of Goebbels’ playbook. To identify with Pepe is a badge of honour, rotten luck for Matt’s long-time housemate who had a tattoo of the original stoner frog below the capped sleeve of his arm and now is challenged out in public as to whether he’s a rampant racist. Matt himself tries to ignore the furore around the loss of control over his creation. 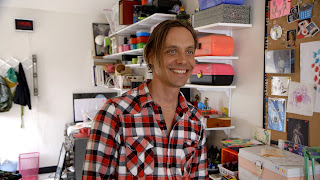 No longer a shorthand imprimatur, Pepe is now moved into an active role, striking down or subverting all his enemies with gleeful antagonism in his eyes and smile. Hillary Clinton gets the green frog treatment and once he announces his intention to run for President, so does Donald Trump, though his Pepe features make him smug and heroic rather than a victim. Trump retweets a Pepe rendition of himself and someone shouts out the word Pepe a one of his rallies and a fine political bromance, or allegiance at least, was launched. Trump’s digital strategist is fairly dismissive of Matt Furie’s renunciation of the alliance, scoffing that it was his fault for creating such an easily reproducible and mutable image as Pepe. As for the basement dwellers, they got on board because they saw Trump as an outsider like them, but more significantly they saw it as an opportunity for once to wield power and influence. If they could get ‘their guy’ into the Whitehouse, they would no longer be losers. Except that Tump’s digital strategist had about as much respect for them as he does Furie. Meanwhile, profiteers make millions of dollars trading in rare Pepe memes as the equivalent of a crypto-currency. Stuff these sedentary footsoldiers drew up from their emotionally stunted but still visually creative imaginations and proceeded to give away for free on public domains, where subsequently it was hoovered up by the carpetbaggers and scalawags 2.0. Ever feel like you’ve been cheated, as Johnny Rotten once announced from the stage? Of course not, they’re not given to any self-reflection and are too busy waging meme wars to notice that Trump hasn’t improved their material lot one iota. Perhaps he couldn’t, simply because they would never emerge into the light from their dungeons and take a proper job.

We get a fascinating view of how memes can act like sympathetic magic, in the sense of a lot of people hoping for the same outcome, how a collective energy channelled through the image of Pepe, brings about the desired result, ascribed to their influence, Qed, magic. The instance in this case was hoping Hillary would collapse during the campaign, which while she was suffering from a bout of flu that left her weakened, she promptly did on the steps of her plane. All hail Pepe the divine who had brought it about. Meanwhile Matt is trying to reclaim his creation and recasts him with hearts and flowers, promulgated by others in the cartoon and comic community, but their sympathetic magic is consumed under a welter of hateful counter-Pepe images of violence, which after all has the possibility of raising a titter in a way that a flower print t-shirt can’t. It’s all just bantz anyway right? Until it isn’t. These guys don’t play by the same rules, they don’t observe the boundaries you do. 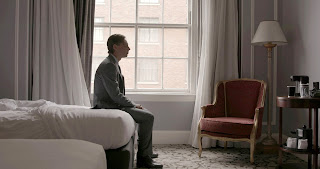 Up until now, Matt has feebly shrugged his shoulders that he drew a nice thing and some big horrid men came and took it away and made it a horrible thing. His Pepe clothing line is manufactured, but like the opprobrium encountered by his tattooed housemate, he now knows it can never be sold. He produces a comic in which he explicitly kills off Pepe, mourned by his three pals, but the genie can’t be put back in the bottle and memes of a grinning Pepe pushing back the coffin lid proliferate online. When an Islamophobic book for children featuring Pepe is produced, Matt is finally shaken from his wimpiness. His lawyers managed to prevent the kindle version of the book being published. His next step is to go to court to prevent certain right-wing enterprises and outlets using his design to make money, such as Alex Jones’ “Culture Wars”, Alt-Right doyen Richard Spencer and white supremacist rag “Daily Stormer” are all issued with takedown notices. The footage from the depositions of both Furie and Jones show them to be equally unconvincing witnesses, Jones all fidgety bluster, an almost catatonic Furie wanting to be everyone’s friend. Some nihilist dropouts are more energised than others it seems. In the end we get one of those unsatisfactory judgements where both sides can claim victory, as Jones agrees to cease using Pepe and makes a payment to Furie he declaims to be token and derisive enough to prove the rightness of his free speech cause.

Though chilling, the documentary not only provided a very clear journey for Pepe’s meme, but by touching on ideas of magic and power we get a far greater insight into just what sort of world we live in. Just a stunning piece of work. Worth the annual license fee on its own.

His books are available from Amazon here.
Images - BBC/Ready Fictions
Email ThisBlogThis!Share to TwitterShare to Facebook