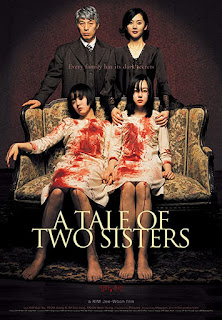 We love Halloween here at The DreamCage and we love the countdown to it even more as, every day in October, David Ames opens a window (well, writes an article) in his Hallow-vent Calendar of Asian horror films. His choice for Day 30 of Hallow-vent is A Tale of Two Sisters ...
Find the full calendar for Hallow-vent 2020 here. 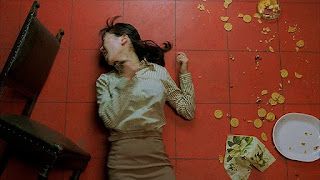 Sometimes a film hits you so hard that you have to watch it two or three more times, just to make sure that everything you saw was real. That visceral, initial feeling of awe is something rare, especially if you watch as many movies as I do. I can only list maybe 20 films I have seen over the course of my 36 years that had that effect and today’s choice is most definitely one. Today we look at the highest grossing South Korean horror film of all time: Kim Jee-woon’s masterful psychological horror picture, 2003’s A Tale of Two Sisters.

The film opens ominously, with a young girl, Su-mi, in a white, clinical room being asked about her past. It is obvious she is in an asylum or treatment center of some sort, but why will eventually become apparent as the plot of the film unfolds. When she is retrieved by her father and little sister, Su-yeon, she is taken back to their childhood home in the country to recover. It seems as though she was suffering from some form of acute psychosis.

We are immediately aware of how protective Su-mi is of her younger sister, especially in the face of her father’s distant and almost indifferent persona, as well as her step-mother’s antagonistic behavior. While in the home, strange things begin to take place: footsteps and shuffling are heard throughout, and Su-yeon seems beset by spiritual forces in the home that want something, but of that we cannot fathom just yet.

As the film progresses, we see just how abusive the relationship between the girls and their step-mother is, including some physical and emotional abuse by the older woman. When this relationship finally boils over, the reveal at the end is both shocking and incredibly disturbing. Also, in brilliant fashion, much like some classic horror films from the 80s, we are treated to a false ending that reveals even more, and takes us in a direction that didn’t seem possible.

I can’t reveal too much, because like an M. Night Shyamalan film, the twist is the crux of the whole plot. I can say that this film is masterfully made, and is still probably one of my favorite Asian horror films, which after this year’s Hallow-vent calendar is a pretty bold statement. The cinematography and shot composition are meticulously organized, and the color motifs are ever present, adding a sense of artistic flair to an already beautifully shot film.

Performances across the board are wonderful. It is hard to choose one above the others, but I will say that Im Su-jung plays Su-mi with a sense of brokenness that pervades every shot. Even still, her defiance at her step-mother and her, almost obsessive, protectiveness of Su-yeon is ever-present. She is wonderful, and although I have seen this film before, this viewing has made me want to search out other films of which she has starred.

It is no wonder that this film holds the place it does in the eyes of audiences and critics. It is almost perfectly produced, and the clues and reveals are incredibly well thought out and planned, so that once the confusion dissipates and the denouement is reached, we as an audience are almost in awe of what we have seen. The remake is decent (2009’s The Uninvited), and successful films like Goodnight, Mommy have borrowed in spots from this, dare I say it, masterpiece.

If you only choose a few of the films from this year’s calendar to watch, this has to be near the top of that list.