CLASSIC DOCTOR WHO ON BRITBOX – The Happiness Patrol 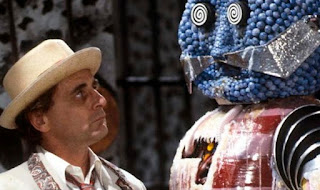 On 26th December 2019, 627 pieces of Classic Doctor Who content were made available to Britbox subscribers. Every Sunday in 2020, our Doctor Who expert, Tony Cross, looks back at some of the classic stories. Today is the Seventh Doctor adventure The Happiness Patrol...

I bloody love The Happiness Patrol.

I love the fact that the sets look like sets for a reason. Terra Alpha is an artificial paradise. Of course, it does not look right.

I love the fact that it is a satire of all that Thatcherite 'family values' guff that we had to put up with throughout the 1980s and which are making a comeback under the new cuddly Cameronite Tory Party. This is driven home by Sheila Hancock channeling Thatcher herself as Helen A. Helen A just wants the best for her people but the ungrateful lot insists on being unhappy. Of course, it is their fault, not hers. She's strong, she's disciplined but like Thatcher herself, there were tears at the end. Helen A's tears are for Fifi, the small yappy-type dog gone psycho. The one thing she loves. She can cope with Joseph C (a laconic Ronald Fraser) doing a runner but it is Fifi's death that gets the tears flowing. Unhappiness has prevailed.

I love the pink TARDIS.

I love the music. I love the use of the blues as a metaphor for comfortable melancholy.

I love that the silly guns, the silly costumes, and artificiality covers a genuine nastiness. The pretence that if you cover something with a coat of pink paint it can't be threatening.

I love the Priscilla P (Rachel Bell) and Daisy K (Georgina Hale) even if they are murderous thugs. I love Harold Innocent's Gilbert M who with his whinging and complaining is a perfect illustration of the banality of evil. You can bet that the offices of the Gestapo and the KGB were filled with the same kind of petty complaints whilst they overlooked the reality of what they were doing. This is why I love Susan Q (Lesley Dunlop) who is a member of the Happiness Patrol who has realized that she can no longer ignore what she is doing.

I love the Kandyman in all his Bertie Bassett glory. With his squeaky, petulant, childish voice. Yes, it might seem silly but why not? Doctor Who has often squeezed darkness out of harmless looking stuff: schoolboys, cuddly toys, etc. Why not a walking, talking sweet. There's no explanation about what he 'really' is but do we have to have all the I's dotted and t's crossed to enjoy something. Here's a cheer for gaps and untied loose ends.

I love the fact that you can say this story has depths. That it can be about how society treats its minorities. It's a story that could only have come out of the nineteen-eighties but has a resonance even now. For killjoys read...gay people, black people, immigrants...pick your minority.

I love Sophie Aldred. I love the fact that Ace hates everything that the Happiness Patrol stands for, that she reacts with genuine anger when poor old Harold V (Tim Barker channeling Deputy Dawg) gets killed and Priscilla P starts making James Bond-style jokes afterward. I love her awkward grumpiness. I love her line about wanting to make them very, very unhappy.

I love the fact that this is the Doctor being proactive again and showing a ruthlessness that he hasn't shown before as he basically topples an empire in one night. I love Sylvester in this story. He gets so many great scenes but the two that stand out for me is his disarming of the snipers with a combination of words and moral force: "look me in the eye, end my life."

But I also like the finality of his "It's done" whilst he watches Helen A break down over Fifi's body. There's a link between this story and Vincent and the Doctor as an illustration that happiness without sadness is meaningless, that every life consists of both. This and Remembrance of the Daleks proves that whatever a certain kind of fan mythology might have you believe Sylvester McCoy is a bloody good Doctor.

I love that this is a story about ideas and politics. That it isn't just a monsters v the Doctor runaround. This is about what we - as human beings - are capable of. The 'disappearances', the bureaucratic blindness - willing or unwilling - illustrated by John Normington's Trevor Sigma; the fear; the propaganda, the courage, the resistance, and the depth.

I love the fact that it isn't perfect but its imperfections are irrelevant.

I love the whole blessed thing.

So sue me.
Tony Cross is the creator of the wonderful Centurion Blog's found HERE and HERE.