CLASSIC DOCTOR WHO ON BRITBOX – Battlefield 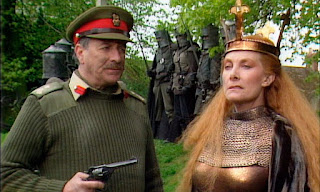 On 26th December 2019, 627 pieces of Classic Doctor Who content were made available to Britbox subscribers. Every Sunday in 2020, our Doctor Who expert, Tony Cross, looks back at some of the classic stories. Today is the Seventh Doctor adventure Battlefield...

So Season 26 kicks off with a story that doesn't quite reach the heights of its ambition but which is enjoyable enough nonetheless.

There are Arthurian knights from an alt-Earth, where Morgaine (Jean Marsh) is Queen. We never really learn much about this alt-Earth except that it appears to use organic magic as technology (this is a guess as only hints are dropped - the ornithopter etc), although how this fits with Doctor Who's previous sniffiness about magic I don't know. Perhaps we are in the realms of the kind of sufficiently advanced technology that appears to be magic. To steal someone else's words. Morgaine doesn't appear to rule everyone. Ancelyn (Marcus Gilbert) appears to be against her and on Arthur's side and arrives on our Earth. I assume he's arrived looking for Arthur and Excalibur but that's never made entirely clear either. Unless I missed it. There's a lot of fogginess here. Has Morgain lived one thousand plus years longer than Arthur or is the alt-Earth contemporaneous with...oh does it matter. Basically, it's Arthurian legend and the Doctor - a future Doctor - is Merlin.

I like that conceit and the moment when Ancelyn reels off the list of the Doctor's known qualities thus revealing that he is - or will be - Merlin is well-scripted and performed. The play between the alt-Earth and our Earth is interestingly done. The alt-Earth speaks that slightly stilted English that passes for how people spoke in the past, talk much of war and honor and act in a more theatrical style than their 'our Earth' contemporaries. Poor old Mordred (Christopher Bowen) gets lumbered with the longest 'laugh like a maniacal villain' scenes ever inflicted on an actor in Doctor Who. He manages to pull it off, just.

Then there's Brigadier Winefred Bambara (played with a certain butch charm by Angela Bruce) and her mislaid nuclear weapons convoy. Bambara is in UNIT. Battlefield is one of the few stories where UNIT appears to be genuinely multi-national and properly prepared to take on any eventuality. The Brigadier's listing of the weapons they have bought with them is a good touch.

Ah...the Brigadier. Yes, Nicolas Courtney is back as Brigadier Alistair Gordon Lethbridge-Stewart and it is a joy to see him again. If anything Battlefield is the Brigadier's tale. Bought out of retirement by the prospect of meeting up with the Doctor again he's up for the fight from the off. He gets a number of nice scenes with the ladies in this story - with Doris (Angela Douglas), with Flight Lt Lavel (Dorota Rae), with Morgaine and with Ace - which makes a fine change. The scenes between him and Morgaine in particular, involving discussions of honour and respect, around the war memorial.

In fact the script is fine. In fact there's some clever stuff in there. The comparison of nuclear weapons as the technological 'mutually assured destruction' and the Destroyer as the 'mythical' one echoing Robert Oppenheimer's post-first nuclear test quote about 'I am become death, the Destroyer of Worlds'. The Doctor's explanation of the impact of a nuclear strike to Morgaine is one of the strongest scenes in the series history: "Is this honour? Is this war?" There's also a nice throwaway reference to the Doctor's excellent speech in The Happiness Patrol when the Doctor threatens to kill Mordred and gets his bluff called. Mordred says: "look me in the eye, end my life."

Most of the acting is fine to across a large cast. James Ellis does a fine job as archaeologist Peter Warmsley with his appropriate Tennyson quotes; Ling Tai gives Ace some company of her own age and explosive obsessed type in the form of Shou Yuing. Later on, Sophie Aldred and Ling Tai play out a sinister, creepy scene inside a chalk circle as Morgaine tries to get hold of Excalibur in fine style. It feels unusually real for a Doctor Who story. Even the minorest of minor parts are well-played.

What lets the story down is it looks a bit like some of the people involved seem not to have picked up on Ben Aaronovitch's instructions or not been too bothered. The direction of the final battle sequence, whilst impressively busy, is rather silly as soldiers run in left and right. The sound design is rubbish. The Knights from the future have rubbish designed guns. The futuristic stuff doesn't look convincing and the underwater model doesn't look very underwater. The editing is a bit half-arsed.