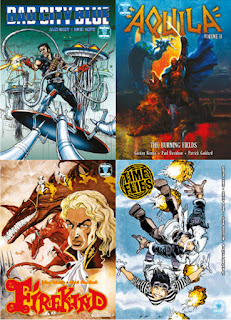 Ben Smith, Head of Film, TV and Publishing at Rebellion, said, “This new series of digital-only collections available from our app and webshop are a fantastic dive into 2000 AD’s incredible backlist. Our archives are bursting at the seams with hidden gems that have either never been collected or just haven’t been digitised before, so it’s great to be able to make them available. The advance of digital-only collections is that we can bring these classics direct to the readers without having to add even more books to our already bumper publishing schedule.”

The new digital-first schedule begins in January with a special edition of John Tomlinson and Simon Jacob’s Armoured Gideon, which features never-before-reprinted extra stories ‘No, No, Nanette’ from 2000 AD Prog 722, ‘Starhavon’s Edge’ from the 1990 2000 AD Sci Fi Special and ‘Making Movies’ from the 1992 2000 AD Sci Fi Special. Gideon is a mechanical ghost-buster from the abode of demons, dubbed ’The Edge’, who keeps the temporal plane clear of supernatural interference!

Old school fans will once again be able to dive into Tom Tully, John Richardson, Steve Dillon and Johnny Johnstone’s The Mean Arena, a brutal mix of rugby, football and all-out street brawls, devised by greedy promoters and played in evacuated towns where the possibility of death lurks around every corner!