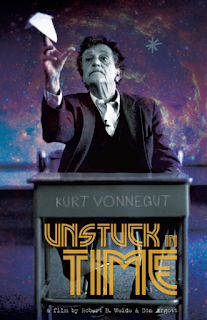 Last week would have been the 98th birthday of Kurt Vonnegut and the date was marked by the announcement that the documentary Kurt Vonnegut: Unstuck In Time will get a general release next summer thanks to IFC Films...
Press Release

A touching, long-in-the-works documentary directed by industry masters Robert B. Weide (Curb Your Enthusiasm) and Don Argott (The Art of the Steal) Kurt Vonnegut: Unstuck In Time traces the life and career of famed novelist and humorist Kurt Vonnegut, who died, aged 84, in 2007.

The feature documentary, the first of its kind on Vonnegut, is a deep, immersive dive into the author’s upbringing and his creative output. It spans back through his childhood in Indianapolis, his experience as a Prisoner of War in World War II, his marriage and family, his early careers as a publicist for General Electric and a car salesman, and his years as a struggling writer, leading to eventual superstardom in 1969 following the publication of his lightning-bolt anti-war novel Slaughterhouse-Five.

The protagonist of that book, Billy Pilgrim, has become “unstuck in time,” arriving randomly at different moments of his life. The phrase provides an apt title for the documentary, as we experience glimpses of Vonnegut over the years through the prism of his long-evolving friendship with director Robert Weide. An Emmy winner (Curb Your Enthusiasm) and Academy Award nominee (Lenny Bruce: Swear to Tell the Truth), Weide first discovered Vonnegut’s writing as a high school student, and wrote a letter to the author in 1982, asking for permission to make a documentary. Vonnegut agreed, and Weide began shooting footage of Vonnegut for the film as far back as 1988, having no idea that the filmmaker and subject would become intimate friends over the next two decades. 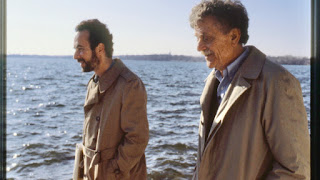 In addition to that 32-year-old footage, the film is abundant with whimsical and open-hearted interviews with Vonnegut, plus rarely-seen archival material. We also hear from his children, his contemporaries, and Weide himself, as the documentary turns inward as a thoughtful examination of its own creation. The light-touch meta technique is one that echoes the work of Vonnegut, who often placed himself as a supporting character in his own novels, with unexpectedly profound results.

Weide’s credits as a director also include documentaries on the Marx Brothers, Woody Allen, and W.C. Fields. He wrote the screenplay for the 1996 film Mother Night, based on Vonnegut’s 1961 novel. Co-director Don Argott, the Philadelphia-based filmmaker, has helmed or collaborated on several acclaimed documentaries, including Rock School, The Art of the Steal, The Atomic States of America, Framing John DeLorean, and Netflix’s Unsolved Mysteries.

Arianna Bocco, EVP of Acquisitions and Productions of IFC Films said, “IFC Films has a proud history of supporting long-evolving film projects and we are thrilled to partner with Bob Weide on this 40-year journey of documenting the legacy of Kurt Vonnegut. The portrait that Bob and Don have created is an unparalleled look at an icon who has shaped modern culture and we are honored to bring that rare glimpse to audiences across the country.”

Director Robert B. Weide added, “When I first approached Vonnegut to authorize this film in 1982, I envisioned a fairly conventional author documentary. As the decades rolled by, fate stepped in, and what I wound up with was far from conventional. As my friendship with my literary idol grew, full disclosure was called for, and Don Argott came on to document the meta element of this story, as I continued to focus on Vonnegut’s biography. What we wound up with was a hybrid that combined our respective strengths as filmmakers and will hopefully be seen as a worthy tribute by Vonnegut’s fans and a compelling introduction for the uninitiated. I’m grateful to IFC for stepping up and bringing this lifelong passion project to the public.”

Don Argott, co-director, added, “As a lifelong Vonnegut fan, it was an honor to be a part of this film. Kurt’s unique voice has been sorely missed, and I’m looking forward to audiences re-discovering his genius.”
Here's a look at the trailer:

The deal for the film was negotiated by Arianna Bocco, EVP Acquisitions and Productions of IFC Films with the filmmakers. The film is produced by Whyaduck Productions and 9.14 Pictures. IFC Films is planning a release in Summer 2021.
Images - AMC & Official website
Email ThisBlogThis!Share to TwitterShare to Facebook