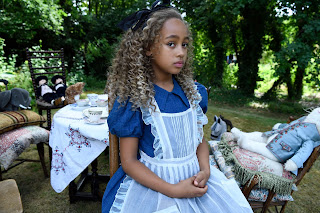 What if Lewis Carroll’s Alice and J.M. Barrie’s Peter Pan were actually brother and sister? Watch the trailer for Come Away...
David (12), Peter (10) and Alice Littleton (8) (Reece Yates, Jordan Nash and Keira Chansa) enjoy an idyllic childhood in late-19th Century England. They love nothing more than to play in their garden and the nearby woods, and are encouraged to indulge their vivid imaginations by their parents Jack (David Oyelowo) and Rose (Angelina Jolie).
Alice and Peter idolise their older brother, David, who divides his attentions between his sister’s stuffed-toy tea parties and playing out thrilling pirate adventures with his brother. Then their ideal world is shaken when Rose’s status-obsessed sister Eleanor (Anna Chancellor) announces that she has has secured David a place at a prestigious boarding school, meaning he will soon be sent away. But, the prospect of life without David is made an even-worse reality when tragedy strikes...
Grief threatens to shatter the Littleton family. Mother Rose recedes into herself, numbed by alcohol while obsessively working on a felt hat. Father Jack, a craftsman who builds model ships, falls back into his gambling addiction and throws himself into debt, reconnecting with his dark, underworld past. Alice initially refuses to accept what has happened and, pushed away by her mother, grows closer to her aunt, who resolves to turn her into a proper lady. Peter, meanwhile, blames himself for the tragedy and struggles to fill the hole left in the family.
As the family's situation worsens, both Peter and Alice find strength in the power of their imaginations and set off on a real adventure to try and rescue the family from debt — an adventure which takes them from the mean streets of Victorian London, to the distant isle of Neverland and the world of Wonderland.
Written by Marissa Kate Goodhill and directed by Brenda Chapman (Brave), the film stars David Oyelowo, Anna Chancellor, Gugu Mbatha-Raw, Reece Yates, Angelina Jolie, Michael Caine and newcomers Keira Chansa and Jordan A. Nash.
Signature Entertainment presents Come Away on 18th December
Image - Signature Entertainment
Email ThisBlogThis!Share to TwitterShare to Facebook