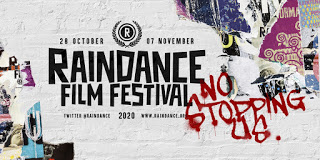 With a Virtual Awards Ceremony live-streamed from the Leicester Square Theatre, this year's Raindance Film Festival Awards have been announced...
Press Release
To celebrate the outstanding achievements of the films screening in competition at the 28th Raindance Film Festival (28 Oct – 7 Nov), 10 prizes are awarded to features, 5 to shorts/music videos, as well as the special ‘Spirit Of The Festival’ award.

In a year when a virus is drastically impacting all of our lives, Giorgos Georgopoulos’s Not To Be Unpleasant But We Need To Have A Serious Talk is named ‘Film of The Festival’. A darkly absurd comedy about a womanizer who contracts an STI that could be fatal to his many partners, it’s also a timely reminder of how vital it is to care about others.

A collective of seven Finnish women directors portray the normality of sexual harassment and abuse in our society in Force of Habit – winner of two awards including ‘Best International Feature’. Oscar-nominated director Milcho Manchevski is named ‘Best Director’ for Willow, an exploration of love, trust and motherhood. Johnny Flynn wins ‘Best Performance’ for his incredible portrayal of a young David Bowie in Stardust. A festival to discover and be discovered, the ‘Discovery Award’ goes to Antonio Lukich’s debut feature My Thoughts Are Silent – a champion at numerous film festivals including Karlovy Vary, now also a champion at Raindance.

Oscar-nominated Terry Gilliam is the subject of He Dreams Of Giants. Named ‘Best UK Feature’, it documents his hard-won success as he finally makes his film about Don Quixote. Other Raindance Jury Award winning documentaries celebrate the power of music to change lives (TOPOWA! – Never Give Up); follow one woman’s fight against an entire system (The State Of Texas vs. Melissa); and take a journey along The Great Green Wall, an ambitious vision to plant 8000km of trees across Africa.
And the winners are:

FILM OF THE FESTIVAL: NOT TO BE UNPLEASANT BUT WE NEED TO HAVE A SERIOUS TALK (dir: Giorgos Georgopoulos, Greece)

Dark comedy about a successful businessman and womanizer who must inform all his ex-girlfriends that he’s a carrier of a sexually transmitted virus, lethal only for women. The result is a skilfully comic portrayal of the fragility and selfishness of the male ego.

A collective of seven Finnish women directors depict the lives of various women on one day in Force Of Habit (dir: Reetta Aalto, Alli Haapasalo, Anna Paavilainen, Kirsikka Saari, Miia Tervo, Elli Toivoniemi, Jenni Toivoniemi, Finland), their stories illustrate the normality of sexual harassment and abuse, both in private lives and in society.

Following their 2002 documentary Lost In La Mancha, filmmakers Keith Fulton and Louis Pepe return to follow Terry Gilliam’s new (successful) attempt at filming The Man Who Killed Don Quixote. He Dreams of Giants documents Gilliam’s hard-won success and is one of the most intense meditations on making art ever seen on screen.

BEST DOCUMENTARY FEATURE: THE STATE OF TEXAS VS MELISSA

Documenting a life plagued by poverty and prejudice, The State of Texas vs. Melissa (dir: Sabrina Van Tassel, France) is the story of the first Hispanic woman to be sentenced to death in Texas as she faces her last appeal.

A new award in honour of Raindance’s new Sonica music strand supported by Spotify, TOPOWA! - Never Give Up (dir: Philip Sansom, Inigo Gilmore, UK) follows five young Brass For Africa teacher musicians from Uganda’s Katwe slums to the stages of the UK, celebrating the power of music to change lives. The filmmakers receive £1,000 from Spotify.

Johnny Flynn stars as a young David Bowie embarking on his first trip to America in Stardust (dir: Gabriel Range, UK). This dazzling music biopic reveals the inspirations and life events that gave birth to his iconic alter ego, Ziggy Stardust, charting the transformation of one of the world’s greatest cultural icons.

Visually luscious, and capturing the colours and sounds of West Africa, The Great Green Wall (dir: Jared P. Scott, UK) follows Malian musician, actress and UN Ambassador, Inna Modja on an epic journey along the Great Green Wall: an ambitious vision of 8000km of trees, planted across the continent to fight the effects of mass migration, resource scarcity and climate change.

Oddball drama My Thoughts Are Silent (dir: Antonio Lukich, Ukraine) follows an over-tall sound engineer and his diminutive mother, as they head to the mountains to record the sound of a very rare bird.

SPIRIT OF THE FESTIVAL AWARD: THE HAT

The debut film by Darren Strowger, The Hat was shot entirely during lockdown, sees Jude Law and Rafferty Law together on film for the first time, and features an original music score by The Who’s Pete Townshend. The first in a planned series of shorts to benefit Teenage Cancer Trust and Teen Cancer America, it’s an ingenious and innovative fundraising idea, and a worthy Spirit of The Festival winner.

Raindance is an Oscar qualifying festival. The recipient of Best Short Of The Festival is eligible for consideration in the Short Film category of the Academy Awards® without the standard theatrical run (provided the film otherwise complies with the Academy rules).

BEST SHORT OF THE FESTIVAL: set in rural Cambodia, A Fallen Fruit (dir: Amit Dubey) portrays a day of silent grief and hopeful dreams of the young son of a farmer, who mourns his mother’s passing, and faces the arrival of his father’s new bride and her daughter.

BEST UK SHORT: a day which begins like any other slowly erupts into violence for one family as they experience institutional racism and fear in The Long Goodbye (dir: Aneil Karia), with a cast including Riz Ahmed.

BEST DOCUMENTARY SHORT: in Cuba, the flight of fireflies is said to be like weakened fires, wandering souls, or the meeting of miniature spectres. Firefly (dir: Claudia Claremi) is an experimental composition that explores creativity and spiritual intimacy.

BEST ANIMATION SHORT: Any Instant Whatever (Michelle Brand) explores perceptions of time, bodies and objects, and our inability to comprehend the full reality of things.

BEST MUSIC VIDEO: Zoea (dir: Powei Su) follows the journey of a mitten crab, a species which has seen a gradual decline in population, mainly due to overharvesting and pollution.