CLASSIC DOCTOR WHO ON BRITBOX – Time and the Rani 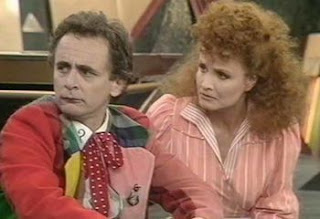 On 26th December 2019, 627 pieces of Classic Doctor Who content were made available to Britbox subscribers. Every Sunday in 2020, our Doctor Who expert, Tony Cross, looks back at some of the classic stories. Today is the Seventh Doctor adventure Time and the Rani...

So Colin Baker leaves in ugly BBC political circumstances and understandably refuses to do regeneration and because there is no 'proper' regeneration Time and the Rani begins with Sylvester McCoy in a Colin Baker wig. It's not the best omen.

Time and the Rani, like Season 24 as a whole, has a poor reputation. There is some small justification for this. However, it isn't all bad. Yes, there is too much prat-falling, particularly in Part One. Yes, it is all very obviously a quarry and yes, Sylvester's costume is almost as distracting as Colin's was. Part of JNT's obsession with uniforms and question marks. The question mark jumper is just too much, although I do like the rest of the costume. If only JNT could have got over this question mark fixation.

However, my biggest issue is that this story takes the Rani who had the potential to be quite an interesting foil to the Doctor and turns her into a Master manqué. Complete with a fiendishly complicated plan involving scientific gobbledygook and a penchant for pointless disguises.

So, even though I do enjoy Kate O'Mara's Bonnie Langford impression, it does make you wonder where she manages to get hold of an identical outfit to Mel's (including massive ginger wig) and WHY? Why bother disguising herself at all, except for our amusement. Anyway, it is fun in its own bizarre way. O'Mara even gets the bouncy walk right. But amusing impersonation does not a good Doctor Who story make.

The Rani's plan turns out to be creating a 'Time Manipulator' from the collective brainpower of a series of geniuses gathered from across the Universe combined with exploding an asteroid filled with Strange Matter and blah-di-blad-di-blah. Oh, something called Loyhargil comes into play: as a light-weight alternative to Strange Matter, I think. Anyway, it gets the Rani pretty excited even if it is a huge steaming pile of Pip and Jane Baker nonsense. There are huge clunking chunks of exposition that just make me want to bang my head against the desk.

Then there's Keff McCulloch's music. It seems to be one of the prerogatives of old age to complain that background music on television is TOO LOUD. Certainly, at the time I didn't find Keff's contributions as irritating as I did this time around. They are about as subtle as a brick. On a couple of occasions, I found myself wishing it would stop. Or at least feel like it had something to do with what was happening in front of me.

Obviously being a new Doctor we get a new title sequence and theme tune. I don't mind this version of the theme tune. It's not my favorite but it is acceptable enough. The title sequence is OK except for the 'wink'. I didn't like this at the time and I think it undermined McCoy from the off.* (Plus I've found it vaguely disturbing since I heard it described by Tachyon TV - I think - as "McCoy's sex wink".)

What of McCoy himself? He does alright. He's better at the quieter more thoughtful stuff than he is at the shouty confrontational and I like the fact that you can see his Doctor thinking. Yes, some of the silly prat-falling in Part One seems designed to play up the comedy and you can see why that might have put people off. However, he seems to have enough Doctor-ish qualities to me at this point to pass muster. However, it is a toss-up between this and the Twin Dilemma for the worst introductory story for a new Doctor.

He isn't helped by Bonnie Langford who seems to have gone up a notch in the theatrical stakes. Mel seems to be a character without any bass notes at all. It's like listening to the tish-tish-tish of someone else's headphones when sitting on the train. It's irritating but bizarrely hypnotic. The fundamental problem with Mel is that they haven't bothered to give her a proper character. Langford's a far better actress than Mel lets her demonstrate but they seem to have settled on making Mel just energetic and full of positivity, which helps no one.

There's not much else to say really. Wanda Ventham as Faroon and Donald Pickering as Beyus bring a much-needed dignity to proceedings. Pickering, in particular, does a fine job of imbuing Beyus - who is collaborating with the Rani in order to save his rather apathetic people, the Lakertyans - with a realization of what he's become and gets a fine death to make up for it.

I also like Mark Greenstreet as Ikona**, apparently the only Lakertyan with any balls at all. His nicely sarcastic two-hander with Bonnie Langford is amusing and there's a dry line in cynicism throughout. Greenstreet also manages to make running at full pelt whilst dressed as a sort of fish-reptile-human escapee from a rather unsuccessful new romantic band look vaguely credible.

A small round of applause should also go to Richard Gauntlett as Urak, leader of the Tetraps. The Tetraps, who are the Rani's guards, are a kind of three-eyed bat-monkey hybrid. They're quite nicely designed if a tad obviously special effects-driven when close-up. Urak is a cunning little bugger combining creepy brown-nosing, thuggish violence, and a nice little plan of his own. It's nice for a minion to get one up on its chief.

So overall Time and The Rani ain't great but it is nowhere near as bad as its reputation suggests, although I might have been tempted to alter that opinion if there had been one more scene of Bonnie Langford screaming. It's entertaining if light-weight. However, it wasn't the best story with which to launch a new Doctor on an unsuspecting world.

But I suspect we'll not see her again, although I could be wrong. I often am.


* The reason I didn't like the wink and still don't like the wink is that at this point in time being a Doctor Who fan wasn't going to earn you the admiration of your school friends. So, I was constantly on the defensive. It didn't matter then that I loved Season 17 partly for its wit and silliness. At this point, I wanted Doctor Who to be serious. In big, block capitals. SERIOUS. I didn't want pratfalls. I didn't want spoons and I absolutely and without a doubt did not want a wink in the title sequence, which might as well have been a large neon sign saying 'this programme is a joke.' And in 1987 when I was in my first year of O-Levels at an all-boys school that I loathed attending because, apart from a handful of boys who were my actual friends, the place was populated by bullies and tosspots. The last thing I wanted Doctor Who to be was a joke. I needed it to be dark, serious, and scary. I needed it to be SERIOUS. That's why I hated the wink. That's why it still annoys me now.

** Although there is a little part of me that thinks there's something of the fascist about Ikona's talk of people 'not being from here' and the Lakertyans desire to find their 'own solutions'. It reminded me of the end of The Space Museum in that respect. Perhaps Ikona isn't the best person to leave in charge of the planet despite his heroics.

*** Yes, I know. I'm pretending it didn't happen.
Tony Cross is the creator of the wonderful Centurion Blog's found HERE and HERE.