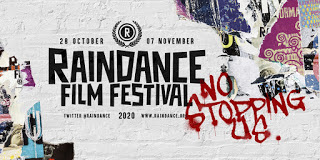 The Raindance Icon Award is the natural evolution of Raindance’s Auteur Award, whose past recipients were directors Terry Gilliam, Guy Richie and Ken Loach. Renamed the Raindance Icon Award in 2019, this annual award now has a broader mandate to honour and celebrate the icons of independent cinema: those who have made an enduring impression via the medium of film.
Sally Hawkins is the recipient of numerous accolades, including a Golden Globe Award and a Silver Berlin Bear for Best Actress in Happy-Go-Lucky, and has been nominated for two Academy Awards (for The Shape of Water and Blue Jasmine).

Sally Hawkins said “I am delighted to receive this honour from Raindance. I am extremely humbled by it, thank you. Independent film is the heart and soul of this industry. It gives us the ability to take chances, to tell challenging stories that may otherwise have been overlooked and to continue to work with and enable exciting new talent. I am very lucky to work in this industry. Long may it continue! I am eternally grateful to receive the Raindance Icon Award. Thank you with all my heart.”

Jude Law said, "Raindance first began in 1993, at around the same time as my own film career. Since then, I've witnessed its growth and the pivotal role it takes in championing independent film in the UK. The workshops and lessons the festival runs play a constructive part in supporting the future of the UK film industry. I've watched and enjoyed some incredible Raindance films over the years and always look forward to the festival. I've long been a fan of Raindance so I am very honoured and proud to receive the Raindance Icon Award. Thank you.”

Raindance's Elliot Grove has an exclusive "In Conversation With" Jude Law, which is due to go live on the Raindance Player today, followed soon after by Elliot's exclusive "In Conversation With" Sally Hawkins. These will be available to watch online via the Raindance Player as part of this year’s festival, alongside a programme of over 50 film premieres, Q&As, shorts, industry events and immersive VR experiences, all available to watch online for free throughout the UK (£5 donation suggested per film).

“Is it just me? Or does New Year’s Eve 2019 seem like decades ago to you too?” adds Raindance founder Elliot Grove. “The world has changed dramatically. Rather than focusing on all that is gritty, edgy, downbeat and gloomy, with this year’s Raindance Film Festival we wanted to celebrate the power of cinema to transform our emotions, to help us escape and take us on a journey far away from the here and now. So what better way for us to celebrate than with two Raindance Icons shining some much-needed starlight on to 2020.”