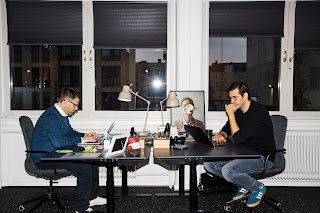 The six part series is created by Christian Potalivo and Jannik Tai Mosholt - the acclaimed duo behind one of the most watched non-English-language series at Netflix, The Rain.

Chosen is a coming-of-age sci-fi story about a young girl whose reality is suddenly turned upside down when everything she thought she knew turns out to be wrong, and she realises that the world is not as safe and blissful as she thought. Chosen is a thrilling and absurd story about teenage life with social pressure, secrets, lies, identity – all set in a Danish setting on the outskirts of Denmark.

Emma has always felt different from anyone else in Middelbo – a small Danish town that became world famous when it was said that a meteor entered the atmosphere and crashed into it 17 years earlier. Now, Middelbo is no longer what it has been, and the question is whether it has ever been what it pretends to be at all? When Emma accidentally discovers that the whole story of the meteor is a lie, a dangerous and improbable truth about the sleepy town reveals itself – something that is far more perilous and incredible than she could have ever imagined. Was it a meteor that hit the little town 17 years ago or was it something far more powerful? With this newly discovered realization Emma is forced to realize that she is on her own and that friends and society will not save her in a time of life where she needs them the most.

Creators and Executive Producers,  Christian Potalivo and Jannik Tai Mosholt, said, "We have always been fascinated by people's fear of the unknown and the strange. It is a powerful driving force in our humanity, and often we as humans are more concerned about what separates us than what actually binds us together, which served as inspiration for this show. We have a strong passion to shed light on what it is that creates young adults' identities – the struggle with love and hope, the eternal doubt and search for who you are and what is needed to fit in and feel that you belong."

The duo further explains, “The Rain was a fantastic opportunity to tell stories in a genre we rarely experience in Scandinavia, and our collaboration with Netflix has been a pleasure that has only grown bigger and stronger over the years. Therefore, it was natural that Netflix was the right partner for Chosen, and the perfect place to develop and tell a story that is universal, has the sci-fi genre as a driving force, but also draws on our own lives and Danish themes.”

Tesha Crawford, Director Nordics Original Series at Netflix, added “We could not be happier to once again team up with Christian and Jannik who have proven to not only be very talented creators but also amazing partners to collaborate with. This story is pushing the boundaries of what one can expect of the sci-fi genre and at the same time will have the similar strong character driven storytelling as The Rain - which captivated audiences in Denmark and beyond.”

Chosen is created by internationally recognized and acclaimed filmmakers Jannik Tai Mosholt and Christian Potalivo from the Danish production company Tall & Small. The duo is also behind the already announced Netflix Original series Elves and the Netflix success The Rain, which became one of the most watched non-English Netflix series to date. Production of Chosen is expected to commence this year in Denmark.