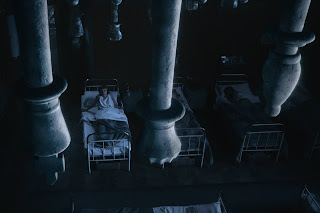 When winning takes everything, what are you left with? Find out more about the background to the latest limited series on Netflix, The Queen's Gambit...

The Queen's Gambit centres on Beth Harmon, a young woman who as a child discovers an astonishing talent for chess. With the help of the janitor at the orphanage where she has been left, her natural abilities flourish, despite her growing dependency on the tranquilizers which have been provided by the state to sedate the children. Haunted by her personal demons and burdened with the gift of genius, Beth navigates her social awkwardness amongst peers and her overconfident ego behind a chessboard. Fuelled by a cocktail of narcotics and obsession, she evolves into an impressively skilled and glamorous outcast, determined to conquer the traditional boundaries in the male-dominated world of competitive chess.
The cast is led by Anya Taylor-Joy (Emma) as Beth Harmon, and features Thomas Brodie-Sangster (Godless), Bill Camp (The Night Of), Moses Ingram (Macbeth), Harry Melling (The Ballad of Buster Scruggs, The Old Guard) , Marielle Heller (A Walk Among the Tombstones), Jacob Fortune-Lloyd (Medici), and Marcin Dorocinski (Roza).
Co-created by Allan Scott (Don’t Look Now) and Academy Award-nominated and Emmy-nominated director Scott Frank (Godless), who also directed and adapted the limited series from Walter Tevis’ novel of the same name. Allan Scott, Scott Frank, and William Horberg (The Talented Mr. Ripley) serve as executive producers.

The Queen’s Gambit began taking shape as a limited series in 2018, but almost 30 years prior, executive producer and co-creator of the series Allan Scott had acquired the rights to the novel. Scott had the vision of bringing the story to the big screen as a feature film and set about writing the screenplay, recalling that while a number of people were interested, uncontrollable forces kept affecting the momentum of the project. “Almost immediately, I landed my first director to shoot the movie,” he says. “Then I had four or five other directors after that who worked on it at various points. The last one was Heath Ledger who died in the middle of preparing the movie. He was going to direct it.” 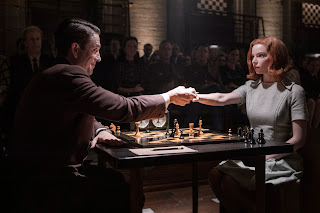 Executive producer William Horberg had also been involved in an earlier iteration of the project many years ago. “I met Allan in the early 1990s when I was running Mirage with Sydney Pollack,” he remembers. “I created and produced a television series for Showtime called Fallen Angels and Allan wrote one of the scripts and we stayed in touch. Then around 2000, I met the author Michael Ondaatje and he was the one who told me about The Queen's Gambit . He said that this was one of his favorite books and he read it annually. I flipped out over it and I thought “Is anybody trying to make this?”. Then lo and behold, as I searched for the rights, I found out that Allan Scott not only had an option on it, but he owned it. It was one of those kismet things. That started this series of director flirtations which, at some point, also included Scott Frank, but we hit a wall trying to get it made as a movie. After Heath Ledger died suddenly, it lay dormant for quite a bit of time. My reconnection with it came through Scott, who had started directing a whole series of interesting movies, and then he did Godless and hit it out of the park. I wrote him a super fan letter about Godless because I really loved it and I loved the format of it.”

Scott Frank recalls that while his early conversations with Allan Scott and Bill Horberg had centred around a feature film, it was suddenly becoming clear that that was way too limiting a frame. “Right after I finished Godless , I had this revelation that there were so many things I had tried to do in the past where I felt that a movie screen couldn't hold all of the story,” he says. “So I said to Bill, what about The Queen's Gambit as a miniseries? Netflix fell in love with the idea and said yes to it.”

Allan Scott says that whatever the final format of the story ended up being, “the overriding interest I’ve always had is to make it powerfully emotional and Scott Frank shared the ambition to do that.” He says that the power of the story has always sprung from a lonely character who has aspects of genius to her, but struggles to keep on the straight and narrow. “It’s about a child growing up, interrupted by this brilliant talent that she has. It’s very difficult to have a normal life if you have an extra normal ability in almost any area, so this story is much more about her demons than it is about her obsession with chess. In fact, there’s nothing you need to know about chess.”

The notion of obsession and addiction was something that the creative team had always been passionate about unpacking in this context, and Allan Scott had spent time considering the throughline of this theme in author Walter Tevis’ work. “I was always deeply interested in Tevis’ obsession with addiction and alcoholism. Tevis also wrote the book ‘The Man Who Fell To Earth’ and that too deals with obsession with the arc of that story surrounding a man from outer space who lands on earth and is destroyed by being introduced to alcohol.”

It was the tone of the storytelling in the novel that initially struck Frank, as it masterfully combined humour with a number of darker ideas. “The way I always describe this story is that it's not about a game, it's about the cost of genius. Beth Harmon is essentially her own antagonist throughout. I'd never read a character like this before. Chess is her particular obsession, so given that this is somebody who is an addict, this game is the one thing she feels like she can control. On that board she’s in charge and whenever she’s moving those pieces around, she’s at home. She is also a young girl in the world of chess, which was primarily a man's world, especially during the 1950s and ‘60s when this story takes place.”

When it came to ensuring that the story on screen also balanced both the struggles and the joys of coming of age, Horberg says that the ability to make those two elements blend together so beautifully was something that was in Scott Frank's DNA. “That's his language,” he explains. “He understood the psychology of Beth in a profound way. He's got a wonderful sense of humour, and he's got an innate gift for understanding theatricality in storytelling. If you look at his now-immense body of work, he's a truth-teller, and he's always rigorous in terms of the drama and the psychology of the characters, but he's not earnest. He always knows that there's laughter in tears, and there's heartbreak in comedy, and he reaches for the spectrum.”
The Queen's Gambit is now available to watch on Netflix.
Images and info - Netflix/PHIL BRAY/NETFLIX © 2020
Email ThisBlogThis!Share to TwitterShare to Facebook