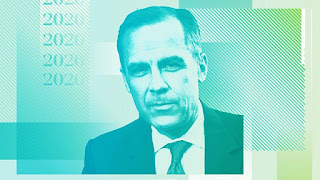 For the first time, the BBC Reith Lectures will be recorded in front of a virtual audience and will broadcast on BBC Radio 4 and the World Service from 2nd December...
In How We Get What We Value, Mark Carney will chart over four lectures how we have come to esteem financial value over human value. He argues that this has contributed to a trio of crises: of credit, Covid and climate, and he will outline how this could be turned around.

In the first lecture Mark Carney reflects that whenever he could step back from the daily crisis management of his former roles, the same deeper issues loomed. What is value? How does the way we assess value both shape our personal values and constrain our choices? How do the valuations of markets affect the values of our society? Carney argues that society has come to embody Oscar Wilde’s old aphorism: “knowing the price of everything but the value of nothing”.

In the second lecture, he takes us back to the high drama of the financial crisis of 2008. More than a decade on, he asks how much have the bankers changed their ways and how far has the financial sector changed.

In lecture three, Carney observes that the pandemic has forced states to confront how we value health, wealth and opportunity. He elucidates surprising differences in the financial value put on a human life in different nations - and goes on to argue that this approach fails to take into deeper thinking about the worth of human existence. In the final lecture, Mark Carney turns his attention to climate change, arguing that the roots of our environmental emergency lie in a deeper crisis of values. He suggests how we can create an ecosystem in which society’s values broaden the market’s conceptions of value.

Canadian Mark Carney had a thirteen year career with Goldman Sachs in their London, Tokyo, New York and Toronto offices. He joined the Bank of Canada in 2003 as Deputy Governor and then served as a senior civil servant in the Canadian Department of Finance under both Conservative and Liberal governments. He was appointed Governor of the Bank of Canada in 2008, just prior to the intensification of the global financial crisis, and held that position until June 2013. Succeeding Mario Draghi, he was Chair of the Financial Stability Board from 2011-2018, where he oversaw the G20’s wide-ranging reform of the global financial system. In July 2013, he became the 120th Governor of the Bank of England, a post he occupied until the spring of 2020. Dr Carney is currently the UN Secretary General’s Special Envoy for Climate Finance and the Finance Advisor to Prime Minister Johnson for COP26 in Glasgow.

The Reith Lectures were inaugurated 72 years ago in 1948 by the BBC to mark the historic contribution made to public service broadcasting by Sir John (later Lord) Reith, the corporation's first director-general. John Reith maintained that broadcasting should be a public service which enriches the intellectual and cultural life of the nation. It is in this spirit that the BBC each year invites a leading figure to deliver a series of lectures on radio. The aim is to advance public understanding and debate about significant issues of contemporary interest.

The very first Reith lecturer was the philosopher, Bertrand Russell who spoke on 'Authority and the Individual'. Among his successors were Robert Oppenheimer (Science and the Common Understanding, 1953) and J.K. Galbraith (The New Industrial State, 1966). The Reith Lectures have also been delivered by the Chief Rabbi, Dr Jonathan Sacks (The Persistence of Faith, 1990), Onora O’Neill (A Question of Trust, 2002), Daniel Barenboim (In The Beginning Was Sound, 2006) and Michael Sandel (A New Citizenship, 2009). Most recently the Reith Lecturers have been Stephen Hawking (Black Holes, 2016), Kwame Anthony Appiah (Mistaken Identities, 2016), Hilary Mantel (Resurrection: The Art And Craft, 2017), Margaret MacMillan (The Mark of Cain, 2018) and Jonathan Sumption (Law and the Decline of Politics, 2019).

The Reith Archive is available here.

This year's lectures will be recorded at the BBC on 11, 12, 13 & 18 November and will again be hosted by Anita Anand, who will also chair question and answer sessions as part of the virtual recordings. In another first, the lectures will also be available to watch on BBC iPlayer as well as on BBC Sounds and the lectures will be streamed on the BBC Parliament channel.