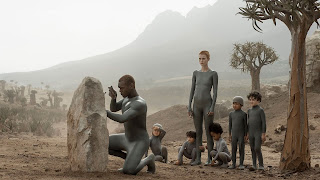 Sky has released the official trailer for Raised by Wolves, an epic sci-fi series from Sir Ridley Scott...

The ten-episode series is due to air on Sky Atlantic and streaming service NOW TV from Saturday 5th December.

The sci-fi drama centres on two androids tasked with raising human children on a mysterious virgin planet. As the burgeoning colony of humans threatens to be torn apart by religious differences, the androids learn that controlling the beliefs of humans is a treacherous and difficult task.

Created, written and run by acclaimed writer Aaron Guzikowski (Prisoners), the series is produced by Scott's Scott Free Productions, with Scott, Guzikowski, David W. Zucker (The Man in the High Castle), Jordan Sheehan (The Terror), Adam Kolbrenner (Prisoners) and Mark Huffam (The Martian) serving as executive producers.
After a striking debut on HBO Max, the series received a season two renewal and is slated to return to the platform in 2021.