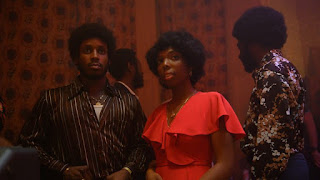 Ahead of its broadcast on Sunday, find out more about the background to the second of the five Small Axe films by Steve McQueen, Lovers Rock...
Press Release

An ode to the romantic reggae genre called Lovers Rock, and to the youth who found freedom and love in its sound, Lovers Rock tells a fictional story of young love and music at a house party in 1980.

Lovers Rock was co-written by novelist and playwright, Courttia Newland (The Gospel According to Cane, Family Room), and Steve McQueen.

Although Lovers Rock is the only fictional story among the five feature films that make up Small Axe, the message of self-reliance and Black ingenuity binds it to the other four.

A movie of tactile sensuality and levitating joy, Lovers Rock mostly takes place over one night at a London house party in 1980. While McQueen and co-screenwriter Courttia Newland have constructed their narrative around the growing attraction between Martha (Amarah-Jae St. Aubyn) and a brooding stranger (Micheal Ward), the film is equally about the rapture of music, specifically the reggae genre of the title - typified in the film’s swooning centerpiece set to Janet Kay’s euphoric 1979 single Silly Games - the intoxicating choreography (Coral Messam) and Kirchner’s intimate cinematography of the actors performance on the dancefloor.

Lovers Rock perfectly captures the ritual of young love at Blues parties. If a man wanted to dance with a woman, he would touch her elbow and let his hand slide down to her hand. If the woman wanted to dance, she would let the man lead her to the floor. If she didn’t, she would pull away. This is just one of the intricate details that plays out in Lovers Rock. Such parties took place in homes and were born out of necessity when Black Londoners were unwelcome to revel in white nightclubs.

Amid the West Indian community’s can-do attitude blossomed a Blues party culture. A sanctuary of sorts, where sweethearts could dress up, pay a small admission fee, dance to romantic Reggae songs, buy beers, eat goat curry and rice and joyously celebrate life without apologies or restrictions.

“I love it because that is what Small Axe is about,” McQueen says. “It is about doing it yourself. Don’t worry if people won’t let you in. You make your own.” 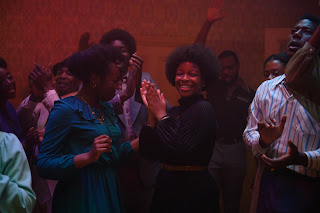 Executive producer Tracey Scoffield goes on to explain: “Lovers Rock sits apart from its Small Axe siblings in that it does not tell a true story of a person or group of individuals taking on the system, but is rather a collective reimagining of a time and place very precious to West Indian Londoners.

"These house parties where the house owners would clear their rooms of furniture and bring in a sound system - large, often home-made speakers together with the crew who would play the music - the DJ, who spoke to the crowd, and the Selector, the one who chose the music. Word would get around the neighborhood and party-goers would pay an entrance fee. For the older West Indian community Lovers Rock will bring back many happy memories and I hope it inspires a new incarnation of Blues from younger audiences.”

McQueen and Newland both grew up around Blues parties and their experiences impacted the way the story was told. “Courttia’s mother used to have parties at his house, so he remembered a lot of that stuff as a child. I came to it through my aunt,” McQueen says.

“I remember stories my aunt would tell. She wasn’t allowed to go to these parties, but my uncle would leave the back door open for her so she could go to the Blues. They lived in Shepherd’s Bush, which is next door to Ladbroke Grove. She’d sneak off to Ladbroke Grove which is where the dance was, and then come back in the morning and have to go to church. It was like Cinderella!”

Cinematographer, Shabier Kircher explains: “What was on the page and in Steve's head felt incredibly sensory and we wanted to explore that. It’s funny because the day we met up to properly talk about how we wanted Lovers Rock to feel was the day after I had attended Notting Hill Carnival, and all that energy and singing, dancing, and just being West Indian in a mass of other West Indians was something that very much was still present and it stayed with me throughout the filming.” 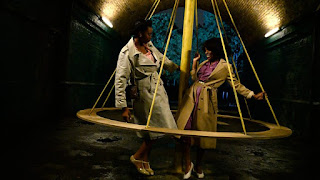 Relative newcomer Amarah-Jae St. Aubyn plays Martha, a rebellious and romantic teenager, who sneaks out of her house to go to one of the home-brewed parties. While there, Martha meets Franklyn (Micheal Ward), a flirtatious stranger who seduces her into dancing with him all night even after her friend Patty (Shaniqua Okwok) decides to go home early.

St. Aubyn says: “Lovers Rock is all about celebrating Black culture, and a lot of the time we weren’t welcome in the everyday parties and everyday lifestyle. So, this is us coming together and celebrating our life and celebrating our culture. The film is a lot about music, as well. It’s going to be so relatable to people of that time, which is really exciting. My dad was a Reggae artist back in the day, so it’s especially relatable to both my parents as it’s stuff they have experienced. It was really exciting to be able to tell their story.

“For me, a lot of my preparation for the role came from my Mum's experience and I did lots of research into the music and fashion of that time. From there, I started to develop Martha and discover her favorite music, interests and what she would like to wear.

“Once we started filming and I worked with Steve on set, I began to learn what triggered my character and discovered how she may have felt, so I developed her even further from being on set.”

Micheal Ward says: “When I discovered Amarah got confirmed for the role, we didn’t hold back. We did our own rehearsals where I went to her house and worked on the scenes. We got to know each other more. I met her family as well who were very much in touch with the themes, music and dancing that is in Lovers Rock and that really helped with understanding the nostalgic element of this story.” 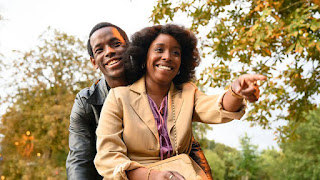 One of the most powerful scenes in Lovers Rock fittingly involves music. Swaying rhythmically to the sweet sounds of Janet Kay’s 1979 hit Silly Games, a packed room of dewy revelers faithfully sing along and when it ends, continue the tune a cappella for five uninterrupted minutes. The strength and jubilance of the voices in the crowd transports the audience back in time 40 years, while also striking a timeless need for fellowship, closeness, likeness and love.

“For me, that was an essential part of that party,” McQueen says. “It was about that sort of liberation, that freedom, that spiritual nakedness. That’s what I wanted to see. You don’t see that very much in cinema - of Black people having that total, absolute lack of inhibition. Honestly, I know that it was only made possible because of my crew.

“A lot of our crew [for the Silly Games scene] were Black, which I was adamant about. And that’s who was on set and without that, that wouldn’t have happened. I don’t think people would’ve felt free enough to let go.”

Choreographer Coral Messam explains: “It was extremely important to get to the heart and soul of Lovers Rock because it requires a particular feeling and a sense of style in the way the body moves and responds to the music.

"The music itself aided this process magnificently. I would tell the actors to go home, learn the songs, the melodies and encourage them to gain an understanding of what this music demands. It has to soak in your mind, skin, muscle, so every part of your being is affected to such a degree, the way you walk and talk, and of course the way your hips move has to be transformed.

“We did a lot of partner work. The dance forms were broken down into different terms like ‘wine and guh down’ or wall crubbing. This requires skill and attention from both parties because it's about tuning in, listening; it’s an exchange of energy, done with style and attention to detail.”

St. Aubyn adds: “Working with Coral on the choreography was amazing, especially because dance now is so different. She helped us understand where energy was felt during that time, back then it was held in your feet and we learned to move through the figure of eight with our hips which represents unity. These parties were where love was created and where marriages often came from, so understanding that energy was hugely helpful.”

McQueen says the a cappella performance wasn’t scripted. But the actors kept right on singing, as if experiencing a spiritual awakening. “All that stuff with the voice variations, that was completely organic. I was merely a witness with a camera. But guess what? They knew the time - 1979/1980. They were in character for that time and knew there were certain things they couldn’t do, wouldn’t do, because of the period, of course. But they sort of channeled that.

“It was just beautiful. I can’t even describe it. It was just as you saw it in the film. As an artist, you have to know when to do something and know when to step back. I think this was one such occasion. It was just so vibrant. It was all about life and possibilities.

“For me, this is my musical. This is the musical I’ve always wanted to do. And with Courttia’s history and my history, it was a great collaboration.”
Lovers Rock is on BBC One on  Sunday, 22 November 2020 from 9:00 PM - 10:10 PM and on Amazon Prime in the US.
Images & info - BBC/McQueen Limited/Parisa Taghizadeh
Email ThisBlogThis!Share to TwitterShare to Facebook