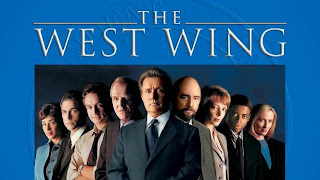 As "the land of the free" sets forth to elect their leader for the next four years, a reminder of the President we all really wanted with Steve Taylor-Bryant's Top 10 episodes from the West Wing...

[first published as two articles back in 2015 - Remember those halcyon days? Before the world went to hell? - Ed]
When I first floated the idea of writing about The West Wing some on the team were excited. We discussed at length our love of the show, the changes when Aaron Sorkin moved on to something new and of course our favourite episodes. It was suggested that I do a Top 10 of mine, a task that is not as easy as you would think. I have not included Isaac and Ishmael as it was a one off special, which left me 154 episodes to choose from. 4 hours later I had a Top 79, 6 hours later I was down to 36. I finalised a Top 17, allowing two-part stories to be classed as one episode and set about the 10. After much anguish I finished my choices. 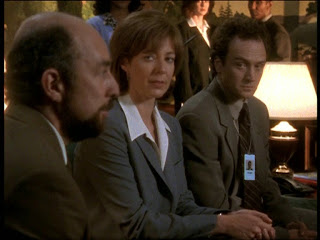 The West Wing staffers are introduced as each learns via phone or pager that the President was in a cycling accident. Josh faces the possible loss of his job after an on-air insult of a political opponent, which Toby tries to prevent by having Josh make a personal apology. Sam's fling the previous night with Laurie who, unbeknownst to Sam, is a call girl, puts him in hot water, which he compounds when ineptly lecturing a class of 4th-graders about the White House and then asking their teacher which child is Leo's daughter. Leo must deal with the fallout from Josh's blunder, as well as 137 Cuban refugees who escaped on rafts and are seeking asylum. The president walks in during during Josh's apology, recites the First Commandment, and lambastes three Christian polls for not denouncing a fringe group.

Sam Seaborn: Ms. O'Brian, I understand your feelings, but please believe me when I tell you that I am a nice guy having a bad day. I just found out the Times is publishing a poll that says that a considerable portion of Americans feel that the White House has lost energy and focus. A perception that is not likely to be altered by the video footage of the President riding his bicycle into a tree. As we speak, the Coast Guard are fishing Cubans out of the Atlantic Ocean, while the governor of Florida wants to blockade the port of Miami. A good friend of mine is about to get fired for going on television and making sense. And it turns out that I accidentally slept with a prostitute last night. Now, would you please in the name of compassion tell me which one of those kids is my boss's daughter?

Mallory O'Brian: That would be me. 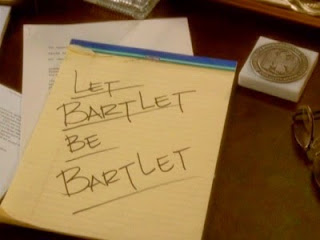 The West Wing staff are feeling malaise as it seems they never get anything accomplished. Meanwhile, a leaked memo is a land mine that could embarrass the administration.

President Josiah Bartlet: Can we get this god-forsaken event over with so I can get back to presiding over a civilization gone to hell in a hand cart?

Mrs. Landingham: You know what this is, don't you, sir?

President Josiah Bartlet: What what is?

President Josiah Bartlet: Nothing wrong with my mood.

Mrs. Landingham: It's your diet.

President Josiah Bartlet: Will you get off me with that?

Mrs. Landingham: You don't get enough roughage in your diet. You know I'm right about that.

President Josiah Bartlet: I know I'd like to beat you senseless with a head of cabbage. I know that for damn sure. 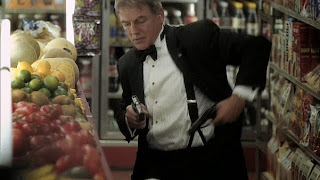 Bartlet, Leo, Sam, Toby, and C.J. travel to New York City for a Catholic fund raiser at a long Broadway play called "The War of the Roses". Josh steps up his efforts to beat his girlfriend, Amy, in their struggle over welfare reform, which leads to her forced resignation. C.J. and Secret Service agent Simon Donavon grow closer, but a tragic event cuts short their relationship. At the play, Bartlet comes face to face with Republican Presidential candidate Rob Ritchie and faces the decision of whether or not to assassinate the Qumari Defense Minister.

President Josiah Bartlet: [to Governor Richie] In the future, if you're wondering: "Crime. Boy, I don't know," is when I decided to kick your ass. 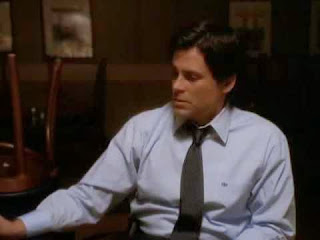 On this year's "Big Block of Cheese Day", a college friend of Donna's asks Sam to help her get her late grandfather, accused of bring a Communist spy inside the U.S. government, a presidential pardon; dealing with the recent revelation that his father had been having an affair for the past 27 years, Sam faces off with an F.B.I. agent, and later with Nancy McNally, over the pardon. Elsewhere, a group of cartographers completely re-educates C.J. on her perception of the globe, and one-time protester Toby, with the help of a straight-talking female security guard, speaks for the White House at a rally to protest against U.S. participation in the WTO and various free trade agreements.

President Josiah Bartlet: It was me, wasn't it? 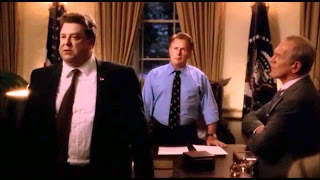 In the wake of his daughter's kidnapping, Bartlet must make a decision between being a father and being President.

Toby Ziegler: [holding his twin babies] I didn't realize babies come with hats. You guys crack me up. You don't have jobs. You can't walk or speak the language. You don't have a dollar in your pockets but you got yourselves a hat so everything's fine. I don't want to alarm you or anything, but I'm Dad. And for you, son - for you - this will be the last time I pass the buck, but I think it should be clear from the get-go that it was Mom who named you Huckleberry. I guess she was feeling like life doesn't present enough challenges to overcome on its own. And, honey, you've got a name now, too.

[turns to his daughter]

Toby Ziegler: Your mom and I named you after an incredibly brave woman, really not all that much older than you. Your name is Molly. Huck and Molly. So, what do I do? Well, you're going to need food and clothes and doctors and dentists and there's that. And should you have any questions along the way. 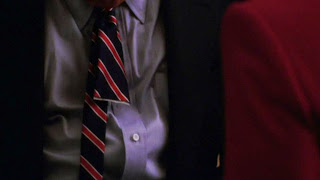 Toby falls prey to a practical joke by the rest of the staff, after which everyone but Leo takes off for the debate in San Diego. Sam makes a side trip to Newport Beach to explain to the congressional campaign manager of the late Horton Wilde why the campaign has to fold even though Wilde is still on the ballot; what Sam doesn't expect is a stalwart named Will Bailey who, determined to keep the ideas of the campaign alive, continues to hold campaign events and do door-to-door canvassing. In San Diego, a nervous West Wing staff readies itself to spin for the president, but when Bartlet and Richie go head to head in a unique debate format, Bartlet tears Richie apart on states' rights, education, taxes, etc., by being precisely the intellectual snob everyone had accused him of being and using it to his own advantage. Back in DC, Leo and Jordon Kendall meet with the Qu'mari ambassador to the U.N., and Leo warns Qu'mar to back off its campaign to charge Israel with the Sharif assassination. After the debate, Sam returns to Newport to meet once more with Will at a bar, during which Sam makes a surprising offer.

President Josiah "Jed" Bartlet: Well, first of all, let's clear up a couple of things. "Unfunded mandate" is two words, not one big word. There are times when we're fifty states and there are times when we're one country, and have national needs. And the way I know this is that Florida didn't fight Germany in World War II or establish civil rights. You think states should do the governing wall-to-wall. That's a perfectly valid opinion. But your state of Florida got $12.6 billion in federal money last year - from Nebraskans, and Virginians, and New Yorkers, and Alaskans, with their Eskimo poetry. 12.6 out of a state budget of $50 billion. I'm supposed to be using this time for a question, so here it is: Can we have it back, please? 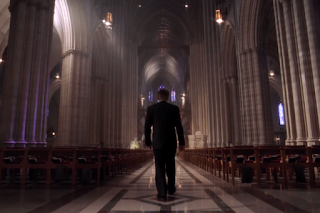 As the Haitian army continues their seizure of the American embassy there, Bartlet and the staff prepare for the announcement that Bartlet has M.S. and most decide whether or not Bartlet will seek re-election. As the funeral for Mrs. Landingham takes place and the announcement draws nearer, Bartlet thinks back to his past in search of the answer to the question everyone is asking: Will he seek re-election?

President Josiah Bartlet: You're a son of a bitch, You know that? She bought her first new car and You hit her with a drunk driver. What? Was that supposed to be funny? "You can't conceive, nor can I, the appalling strangeness of the mercy of God," says Graham Greene. I don't know whose ass he was kissing there, 'cause I think You're just vindictive. What was Josh Lyman - a warning shot? That was my son. What did I ever do to Yours but praise His glory and praise His Name? There's a tropical storm that's gaining speed and power. They say we haven't had a storm this bad since You took out that tender ship of mine in the North Atlantic last year. Sixty-eight crew. You know what a tender ship does? Fixes the other ships. It doesn't even carry guns. It just goes around, fixes the other ships and delivers the mail. That's all it can do. Gratias tibi ago, Domine. Yes, I lied. It was a sin. I've committed many sins. Have I displeased You, You feckless thug? 3.8 million new jobs, that wasn't good?

Bailed out Mexico. Increased foreign trade. Thirty million new acres of land for conservation. Put Mendoza on the bench. We're not fighting a war. I've raised three children. That's not enough to buy me out of the doghouse? Haec credam a Deo pio, a Deo iusto, a Deo scito? Cruciatus in crucem. Trus in terra servus, nuntius fui, officium perfeci. Cruciatus in crucem. Eas in crucem.
[deliberately lights a cigarette and grinds it out on the Cathedral floor] You get Hoynes. 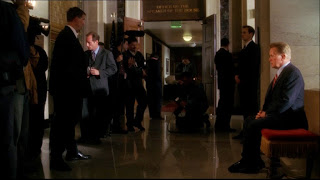 President Bartlet refuses to let Speaker of the House Haffley hold him hostage on the budget and allows the government to be shut down.

Vice President Bob Russell: You know what they call a leader with no followers? Just a guy taking a walk. 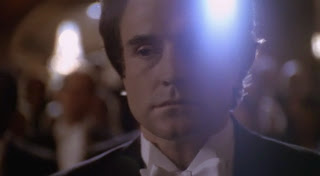 Leo orders Josh to speak to a trauma psychiatrist, who asks him to review the events of the last three weeks: Toby insisted on having live music in the foyer for Christmas, an Air Force pilot separated from his flight team without explanation, Yo-Yo Ma performed at the White House, and Josh managed to cut his hand quite badly. Also, C.J. looks into a report of a woman freaking out during a tour of the White House. 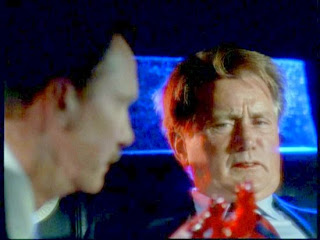 C.J. Cregg: There were 36 homicides last night. 480 sexual assaults. 3411 robberies. 3685 aggravated assaults, all at gun point. And if anyone thinks those crimes could have been prevented if the victims themselves had been carrying guns, I only remind you that the President of the United States was shot last night while surrounded by the best-trained armed guards in the history of the world.

I hope you've enjoyed my Top 10 and I am pretty close to what you would have picked yourselves? I learnt a lot by doing this. I can rewatch any episode of the show and still love it, there are so many characters I relate to, and it appears I love the Second Season the most but there are so many great episodes across the Seven Seasons. Here is a few that didn't make the cut.