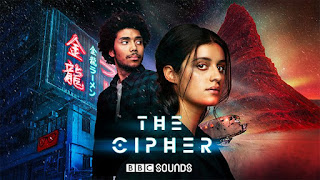 Anya Chalotra and Chance Perdomo star in a new sci-fi podcast thriller The Cipher, coming to BBC Sounds this Christmas...

The Cipher stars Anya Chalotra, best known for her critically acclaimed role as Yennefer in the record-breaking fantasy Netflix series The Witcher, and BAFTA nominee actor Chance Perdomo, best known for his role as Ambrose Spellman in the Netflix smash hit, Chilling Adventures Of Sabrina.
The Cipher sees a cryptic puzzle appear on the internet, stumping the brightest minds in the world. When 16 year old Sabrina (Anya Chalotra) cracks the code, she finds herself at the heart of an international hunt for a serial killer… a killer who might not be from this world. Joined by New York teen Benny (Chance Perdomo) - the only other person to solve the cryptic Parallax puzzle, Sabrina embarks on a journey that turns her whole world upside down, throwing everything and everyone she’s ever known into question. A fresh take on the hopepunk genre, The Cipher is a thriller about finding yourself while finding a killer.

Anya Chalotra said, "I’m so excited to be working with BBC Sounds on this podcast, The Cipher. I’ve loved working with the cast and bringing Sabrina’s story to life. The Cipher is witty and thrilling and refreshing- I hope all listeners will enjoy the adventure at Christmas as much as we enjoyed making it."

Chance Perdomo added, “It been really great working with Anya on The Cipher podcast for BBC Sounds. I can’t wait for everyone to have a listen later this year - if you’re a fan of likes of Stranger Things or The OA, you will love this story - its definitely not one to be missed!”

Jason Phipps, Commissioning Editor for Podcasts on BBC Sounds, says: “We always knew this podcast was going to be absolutely epic, and now with Anya and Chance in lead roles it’s taken it to a whole other level. This thrilling adventure about hope over adversity couldn’t be more timely given the unimaginable situation we all find ourselves in this year, and we hope The Cipher brings some much needed action, adventure and optimism to audiences this Christmas on BBC Sounds.”

Also joining the cast is BIFA Award winner Samuel Adewunmi (The Last Tree) who will voice the character, Fergus, a gun-for-hire tasked with keeping Sabrina and Benny in line, who gets much more than he signed up for. In addition, actors such as Hera Hilmar (Mortal Engines), Leanne Best (The Woman In Black 2), Molly Harris (Doctor Who), Enzo Cilenti (Game Of Thrones), Olivia Popica (Fantastic Beasts: The Crimes Of Grindelwald) and many more. Listeners can also look forward to another exciting casting announcement coming soon.

The Cipher is produced by Goldhawk Productions, winner of Best Fiction and Highly Commended Podcast of the Year at the British Podcast Awards for Passenger List. The Cipher was commissioned by Jason Phipps for BBC Sounds. The executive producer and director is John Scott Dryden, and is created and written by Brett Neichin with additional writing by Janina Matthewson (Murmurs).

The Cipher will be available on BBC Sounds from 26th December
Image - BBC
Email ThisBlogThis!Share to TwitterShare to Facebook