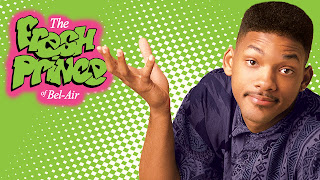 Now this is a story all about how... the Fresh Prince of Bel-Air is heading to BBC iPlayer, Sky Comedy and NOW TV on demand in the New Year...

The classic series, which launched 30 years ago and originally aired on BBC Two in the UK, with over 148 episodes across 6 seasons, the full series from Warner Bros. Television will be available on demand from 1  January 2021.
Before shooting into the showbiz stratosphere with four Grammy Awards and box-office hits Independence Day, Men in Black and I Am Legend, music and movie icon Will Smith first rose to stardom as a West Philadelphia kid who gets the uplift of a lifetime when he's sent to live with his rich relatives on the West Coast. Talk about your culture clashes...and your audience pleasers: Fresh Prince regularly showed a flawed and conflicted African-American household that, despite internal differences, pulled together and made life work - and laughter ring out.

The series was produced by The Stuffed Dog Company and Quincy Jones Entertainment in association with Warner Bros. Television and NBC Productions.
Email ThisBlogThis!Share to TwitterShare to Facebook