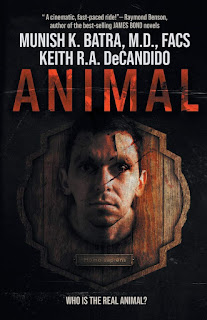 "Who's the real animal?" WordFire Press announce the publication next month of Animal, the debut thriller Munish K. Batra with Keith DeCandido ...
Press Release [tw - Animal Cruelty mentioned]
Animal is a relentless thriller by renowned surgeon and humanitarian Dr. Munish K. Batra, in collaboration with international best-selling author Keith R.A. DeCandido. This thought-provoking, pulse-pounding novel came about after Dr. Batra was galvanized into action by the animal abuse atrocities he witnessed when he was traveling the world volunteering his medical services. Together, Batra and DeCandido wanted to write a novel that would make people wonder: is murder ever justifiable when protecting the innocent?
Two grisly murders are committed at a meatpacking plant by a person wearing a cow mask…not long after the CEO of a water park is brutally killed by someone wearing an orca mask.

Interpol Agent An Chang believes these are the latest acts of a ruthless serial killer he has been chasing for more than twenty years, a killer who targets those who harm innocent animals.

Elephant poachers in Chad, Russian big-game hunters of endangered species, dog fighters in Atlanta, European food execs who gorge ducks to make paté, gorilla hunters in the Congo, ivory merchants in China. Those who torture animals are not safe…

Working with two California detectives, Chang races to unmask the killer, even as the killer’s spree becomes more deadly. But the killer’s motives and history are far deeper and more complex than anyone realizes, and the truth of his rampage leads Chang on a wild chase from the streets of Shanghai around the globe.
With movie rights for ANIMAL snapped up by Lonetree Entertainment and with Tony Eldridge attached as Producer and developing the script, this debut is sure be on everyone’s radar soon. Eldridge, who describes Dr. Batra as "an up and coming Michael Crichton,” is known for his work on The Equalizer movies with Denzel Washington and The Naked Truth.

Munish K. Batra’s cosmetic practice is one of the busiest in the nation, and Dr. Batra has been featured in People, The Los Angeles Times, and many other national media outlets, as well as on The Oprah Winfrey Show. He is active in developing multispecialty medical practices that put patient care and the doctor-patient relationship at the center of health care.

Dr. Batra is currently collaborating with Keith R.A. DeCandido on other fiction projects, and is also working on a nonfiction book called Medical Madness. He also enjoys Brazilian jiu-jitsu, yoga, and meditation. His wife Pooja and their three young children, Ayaan, Kairav, and Kiara, offer him constant encouragement and support.

Keith R.A. DeCandido is the award-winning, best-selling author of more than fifty novels, almost a hundred short stories, a smattering of comic books, and a ton of nonfiction. Some of it is in thirty-plus licensed universes (Star Trek, Alien, Doctor Who, Marvel Comics, Supernatural, World of Warcraft, Cars, Resident Evil, The X-Files, Orphan Black, etc.), others in worlds of his own creation, from fantastical police procedurals in the fictional cities of Cliff's End and Super City to urban fantasies in the somewhat real cities of New York and Key West.
As a special gift to readers who pre-order ANIMAL, renowned author Keith R.A. Candido has written an exclusive urban fantasy story "Under the King's Bridge,” about a supernatural hunter-for-hire who is tasked with finding out why everyone in a small neighborhood in New York City has become listless and lifeless. This will be available exclusively at no cost to readers interested in pre-ordering ANIMAL. Visit www.animalthebook.com to find out more about the book and to pre-order ANIMAL today!
A portion of the proceeds from ANIMAL will go to the World Wildlife Fund and The Humane Society, among a number of other animal funds and sanctuaries.
Animal is published on January 5th 2021
Email ThisBlogThis!Share to TwitterShare to Facebook