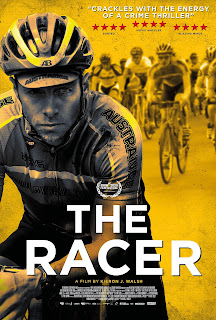 To celebrate the upcoming release of the intense Tour de France-set cycling drama The Racer later this month, read a feature on some of the Most Thrilling Races in Film...

When years of intense training, build-up and bitter rivalries can come down to a final sprint over the finish line for all-or-nothing glory, it's no surprise that sporting races have proved to be the perfect material for cinematic excitement. And whether it be by foot, on a bike or at the wheel, the behind-the-scenes dramas leading up to the climactic race often offer as many thrills as the race itself.

Intense drama The Racer is no exception. Set in the high-speed world of competitive cycling, the film transports us to Ireland, 1998, for the opening stage of the world's most prestigious cycling event, Le Tour de France. Here we find aging cyclist Dom Chabol in danger of losing his place on the team without ever having tasted winner's glory. Even best friend Sonny (Iain Glen, Game of Thrones), the team masseur and the man in charge of the blood-doping operation that has kept Dom at the peak of physical powers, can't help. But just as Dom gears up to head home, another teammate is knocked off the Tour and Dom is thrown back into the saddle. Now with the years of blood-doping having taken a toll on his body, this racer may find himself paying the ultimate price for a final shot at the glory...
To celebrate The Racer as it takes position to sprint into cinemas and on streaming platforms from 18th December, here's a look back at some of the most thrilling races on film. 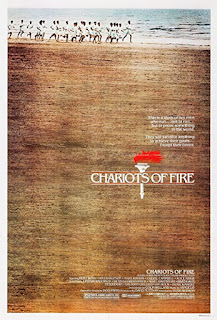 A classic of cinema, Chariots of Fire tells the story of two real-life British athletes at the 1924 Paris Olympics. Ian Charleson stars as Eric Liddell, a devout Scottish Christian who runs for God's glory and Ben Cross portrays Harold Abrahams, a Jewish student at Cambridge University who competes to overcome the racial prejudice he has endured all his life. As a strict Christian, Liddell refuses to run in his chosen 100 metres because it takes place on a Sunday so decides to compete in the 400 metres race on a weekday, ultimately breaking the world record and winning the Gold Medal. Meanwhile in the 100 metres, fellow-brit Abrahams’ scoops the gold, making the 1924 Olympics a landmark in British sporting achievement. The film is perhaps best known for its iconic electronic score by Vangelis that accompanies many of its rousing race sequences and it was nominated for seven Academy Awards, picking-up four including Best Picture, Best Original Screenplay and Best Original Score. With a supporting cast of homegrown acting favourites including John Gielgud, Nigel Havers and Ian Holm, Chariots of Fire is a beloved British classic about two inspirational athletes who made history at the world’s greatest sporting event. 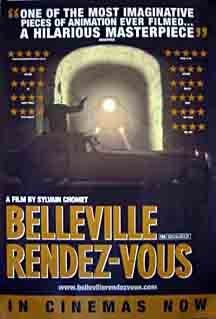 Weaving a bizarre tale of organised crime and the abduction of a Tour de France cyclist, Sylvain Chomet’s fantastical animation Belleville Rendez-vous (also known as The Triplets of Belleville) made waves among critics upon its release in 2003. Steeped in surreal imagery and with almost no dialogue, the film follows an elderly woman called Madame Souza who's grandson Champion has been kidnapped by the French Mafia and forced to ride his bike (without ever stopping) at their underground winery to juice the grapes. And yes, it is every bit as crazy as that sounds! Souza then embarks on a race against time to find Champion before he dies of exhaustion, but that's not before encountering a parade of colourful characters along the way such as the singing, dancing Triplets of Belleville. Chomet’s film was a hit on the festival and art-house cinema circuit as well as garnering two Academy Award nominations and seven years later the director would be back with his multi award-winning The Illusionist. With gorgeous animation, bizarre humour and an unforgettable, toe-tapping song, Belleville Rendez-vous is a sporting film with a difference! 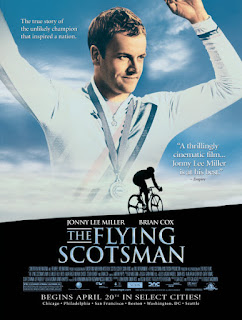 In July 1993, and then again in April 1994, Scottish cyclist Graeme Obree broke the world one-hour distance record, earning him the name The Flying Scotsman. His incredible story of racing achievement is told in Douglas Mackinnon’s film of the same name, with Jonny Lee Miller starring as Obree. Known for his unconventional sitting position and his iconic ‘Old Faithful’ bike, Obree had a turbulent racing career that included being fired from a professional team in France. The Flying Scotsman focuses on the period in his life when Obree would win, lose and then re-win the world one-hour distance record, with plenty of heart-stopping cycling action in the Velodrome. Obree has since been inducted into the Scottish Sports Hall of Fame and with

screen veteran Brian Cox and Lord of the Rings’ Billy Boyd filling out a top-notch cast of Scottish acting talent, The Flying Scotsman is a thrilling and emotional tale about one of the country’s greatest living sporting heroes. 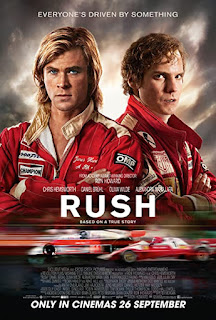 Speeding onto screens in 2013, Rush was a turbo-charged look at the rivalry between motor-racing aces James Hunt and Niki Lauder. A model of Austrian precision and cool-headedness, Lauder proved the opposite of the brash, party-loving Brit, Hunt, though the pair would prove equal in pushing themselves to ever greater glories during their tumultuous time behind the wheel. The film charts the development of their careers in parallel, with racing drama on the track matching personal troubles at home until it comes to a head during the 1976 Formula 1 season. When a devastating crash threatens to put an end to Lauda's racing days, the driver goes against the odds to return and take on his rival in an attempt to win the championship on a rain-soaked track at the Japanese Grand Prix. Directed by Ron Howard, the film benefitted from some choice casting with Thor star Chris Hemsworth excelling as the outgoing and self-confident Hunt and acclaimed actor Daniel Brühl capturing Lauda's steely determination. For a true-life tale of a dangerous racing rivalry, Rush takes pole position. 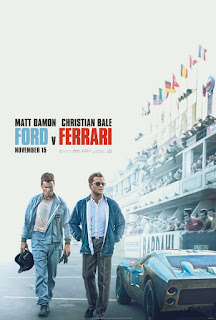 Another film to explore an intense motor-racing rivalry, Le Mans '66 (aka Ford Vs Ferrari) looks at the friendship between an automotive designer and a hot-tempered racer and how it pushed a failing motor company to victory over its rival. After a failed 1963 attempt by Ford Motor Company to buy Ferrari, an insulted Henry Ford looks to design a car capable of beating Ferrari at the prestigious Le Mans race. To do this they enlist the help of designer and former Le Mans winner Carroll Shelby, who insists on bringing his best friend, the hot-tempered driver Ken Miles, along for the ride. While Ford is against using Miles as a driver, Shelby pushes their cars to ever great speeds and insists that Miles is the man who can drive them, culminating in a confrontation between Ford and Ferrari at the 1966 24 Hours of Le Mans race. With director James Mangold at the helm and A-list acting talent in the form of Matt Damon (Shelby) and Christian Bale (Miles), Le Mans ‘66 was going for gold at the 2019 Academy Awards where it picked up a Best Picture nomination.