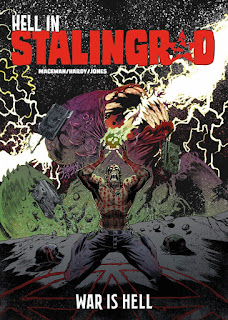 Currently unleashing Hell in Stalingrad are Madius Comics and Mad Robot Comics. Susan Omand entered the fray and read it...

Nothing says "festive season" more for me than a gory, violent, historical war comic, so getting to read Hell in Stalingrad written by Rob Jones and Matthew Hardy means that Christmas has definitely come early.

Set in the midst of the Battle of Stalingrad - with the Soviet Kessel slowly engulfing the German forces. We follow the story of a German soldier, Ernst, and Vassily, his Russian counterpart as they must set aside vast ideological differences in a bid to thwart an otherworldly threat.

Can these two men from such radically different backgrounds, caught up in one of the bloodiest battles of the Second World War prevent a demonic force from crossing over into our world and plunging the entire world into the fires of Hell?

I loved this! Feeling very much like a DC Thompson Commando comic, of which I’ve always been a huge fan, the story is related in flashback, as Chapter 1 is set in 1953 with Vassily, now a prisoner, being interrogated. It's not long before we’re flung into to action of the battle of Stalingrad itself, with the start of Chapter 2 festively enough stating it to be Christmas Eve 1942, and the unremitting, unfolding events that faced Vassily and Ernst. The end of the story in 1942 is satisfyingly bleak and the end of the 1953 scene, as the tale bookends back to Vassily in the prison camp, is utterly magnificent! There is no let up in the tension, or the violence, but it’s also a clever horror story, skilfully told. In lesser hands, so much dialogue in a comic might have been difficult to follow but Rob Jones is a master of his art with lettering too, so the longer conversations are easy to keep track of. 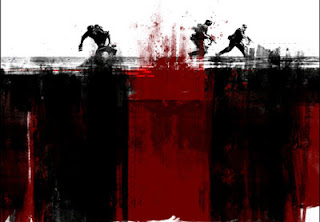 There’s only one word for the interior art by Russell MacEwan and WASM – STUNNING. There’s such a lot of detail to take in without it looking fussy or cluttered; having fewer panels per page also lets the art breathe more (I know what I mean). I love the monochrome sketchy look of some of the panels with, sometimes literal, splashes of red, while the halftone dots and almost collage cutout look on other pages gives it a bit of a zine feel. Both these techniques, for me, add atmosphere to the story being told as you can almost imagine the panels being sketches or scrapbook images collected at the time by a war artist and I think the choices of manila folder endpapers and dodgy typewriter font for the intro/disclaimer was inspired!

The pin-up gallery at the back is also incredible, with work from cover artist PJ Holden as well as Russell MacEwan with Paul Moore, Russell Mark-Olson and Iain Laurie all making outstanding contributions in their own unique styles and giving new perspectives to the original story. My absolute favourite though has to be Lucy Sullivan’s work – the nightmarish quality of this one just blew me away, I would have that on my wall. 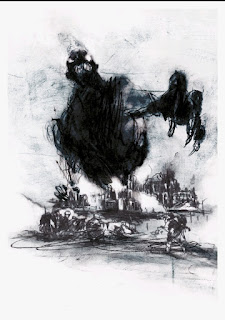 As I said back when Hell in Stalingrad was crowdfunding in the summer “It says War Is Hell on the cover but rest assured the comic looks absolutely heavenly” and I absolutely stand by that. The joy is that the story absolutely lives up to the stunning artwork. From start to finish, cover to cover, this is a must-have masterpiece and definitely my comic of the year.