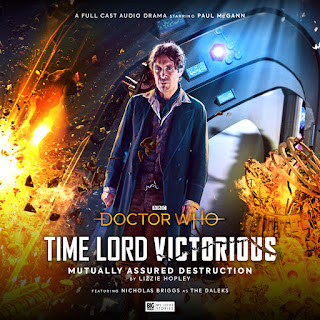 'It's Die Hard with Daleks.' That’s the elevator pitch for the latest Doctor Who audio adventure from Big Finish Productions...

The Eighth Doctor is trapped in the Vortex, falling through time on a spaceship along with the Dalek Time Squad. The third full-cast audio drama in the multi-platform Doctor Who – Time Lord Victorious series is an all-action thriller that will require the Doctor’s most ingenious escape plan yet.

Paul McGann stars as the Doctor, with Nicholas Briggs as the Daleks, Samantha Béart as Tiska and Wilf Scolding as Groth.

The fallout of the great battle.

Outnumbered and alone, on a Dalek time-ship careering through the Vortex, the Doctor must use all his cunning to survive. As the saucer disintegrates around them, the Doctor is trapped with a crew of increasingly desperate Daleks.

Or are the Daleks trapped with him?

Paul McGann said: “Time Lord Victorious is a really smart idea. It's a huge shot in the arm for Doctor Who. It gets everybody working together, it gives the fans what they want, and to have some huge, overarching, intertwining story to work on is a brilliant idea. This is the future.”

Writer Lizzie Hopley added: “I can honestly say it’s one of my favourite things that I’ve ever written for Big Finish. The Dalek Time Squad, who are running the ship, were new to me so playing with them was great fun. As fast as they are doing their repairs, the Doctor is thwarting them at every turn. My favourite scene involves the Doctor and the scientist. No spoilers, but I hope Paul McGann and Nicholas Briggs had as much fun performing it as I did writing it.

“The script editor, Matt Fitton, gave me two other characters to throw in the mix. This opened up the whole story as it gave the Doctor someone to engage with, in addition to out-smarting the Daleks who don’t know he’s onboard or what he’s doing.”

Doctor Who – Time Lord Victorious: Mutually Assured Destruction is now available to own as a collector's edition CD (at £10.99) or digital download (at £8.99) exclusively from www.bigfinish.com

Big Finish listeners can save money by purchasing a bundle of this adventure alongside other Doctor Who – Time Lord Victorious audio dramas from as little as £22.