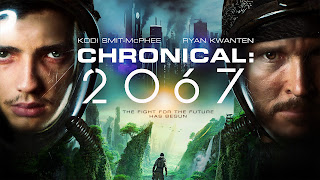 "The fight for the future has begun." Out next week from Signature Entertainment, Ren Zelen watched Chronical: 2067...

In Seth Larney’s dystopian sci-fi Chronical: 2067, we find an Earth that has been ruined by pollution and climate change. The air is so poisonous that people must resort to breathing artificially created oxygen that they carry around in canisters. The synthetic oxygen is manufactured by the Chronicorp corporation and, as capitalism still rules, the oxygen and its equipment come in different qualities, depending on how much you can pay.

However, disaster strikes even the capitalists as the constant inhalation of the synthetic oxygen has created an illness set to ultimately kill off the population.

The only hope for a cure comes in the form of time travel. If someone can be sent to the future to see if humanity has survived and found a cure, then they can bring it back to the decimated earth of 2067 and its dying inhabitants.

Luckily, it turns out that scientists have been working on developing a portal to the future. The time machine is called a Chronicom and the head of the scientists is Richard Whyte (Aaron Glenane). He has successfully sent an SOS message to the future through the portal, but, imagine his astonishment when an answer comes back - “Send Ethan Whyte”. The ‘Ethan’ in question happens to be his eight-year-old son.

The story is told in flashbacks but concerns itself mainly with the grown-up Ethan Whyte, (Kodi Smit-McPhee, X-Men: Apocalypse, ParaNorman) who, having lost his father Richard and his mother in violent circumstances many years previously, is now a tunnel worker for the city’s dirty and unstable power plant.

He frets about his wife Xanthe (Sana’a Shaik) who is suffering from ‘The Sickness’ - the terminal illness caused by inhaling Chronicorp’s tainted synthetic oxygen. Ethan is working hard to make life easier for himself and his ailing wife in a decaying society. Working alongside him is his colleague and his oldest friend, Jude, (Ryan Kwanten, True Blood, Dead Silence).

Suddenly, Ethan is summoned to the office of Regina Jackson (Deborah Mailman), Chronicorp’s Chief Technology Officer, who reveals to him that he has been chosen to travel to the future in his father’s machine and be the saviour of mankind.

Ethan is told that the scientists have enough energy to send him on a one-way trip forward in time to see what kind of cure might be bought back, but once there he has to find his own way home to 2067. Ethan and the corporation are at a loss as to why the message they received from the future had asked for him by name.

Ethan is unwilling to leave Xanthe, but she and Jude persuade him that it’s the only thing to do - he has the chance to save mankind and so find a cure for ‘The Sickness’ plaguing what’s left of the world.

Can Ethan find out why the future specifically asked for him? Can he find a cure for their lack of real oxygen? Finally, can he find a way back to his present world and save his sick wife?

When Ethan takes the mission and emerges into the far future, he finds something entirely unexpected. He encounters a world covered in lush plant growth… and stumbles across a skeleton. These two discoveries set in motion a train of events which lead to some staggering and explosive revelations where the truth is not what it seems to be, and where Ethan is forced to make some hard choices.

Writer/director Seth Larney has taken a clever premise and woven it into an engaging dystopian sci-fi story. He plays with a vision of the future and the notion of time travel, creating a twisty plot that should keep genre fans engaged enough to see how its secrets unfold, even if some shaky performances, odd editing and clunky dialogue might occasionally serve to distract.

Chronical: 2067 might not have a huge budget, but Larney makes exceptional use of what he has. Inevitably, every sci-fi film since has been influenced by Ridley Scott’s vision of the dystopian future city in Blade Runner, and Chronical: 2067 is no exception. However, after the early part of the film with nods to the grimy, Blade Runner-like cityscape, the scenes after Ethan’s jump into the future which show lush greenery overrunning decaying buildings prove to be a welcome contrast.

Considering its limited budget, the film does looks pretty glossy, with Larney employing a vision of the future that isn’t all fiery chimneys, skyscraper-high ads and dingy apartments, but concentrating instead on the beauty and value of our plant life and vegetation.

The film may present a dire warning about where mankind may be heading in its disregard for the environment and the plundering of resources in the relentless march of capitalism, but also offers some hope in the belief of one man that humanity can have to will to save itself.