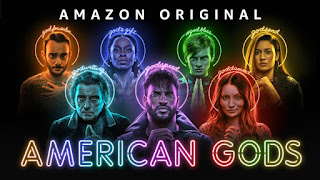 "Faith is on the line," Watch the trailer for Season 3 of American Gods, coming to Amazon Prime Video and Starz next month...
Press Release

Ricky Whittle reprises his role as ex-con Shadow Moon, a man pulled into the service of the mysterious Mr. Wednesday, played by Ian McShane— only to discover that not only is his charismatic but un-trustable boss actually the Norse All-Father god Odin, he’s also… Shadow’s father.
In Season Three, Shadow angrily pushes this apparent destiny away, and settles in the idyllic snowy town of Lakeside, Wisconsin — to make his own path, guided by the gods of his black ancestors, the Orishas.

However, he’ll soon discover that this town’s still waters run deep, and dark, and bloody, and that you don’t get to simply reject being a god. The only choice — and a choice you have to make — is what kind of god you’re going to be.


American Gods season three is due for release on Amazon Prime Video on January 11th, 2021, the day after it premieres on Starz in the US.
Image - Amazon Prime
Email ThisBlogThis!Share to TwitterShare to Facebook