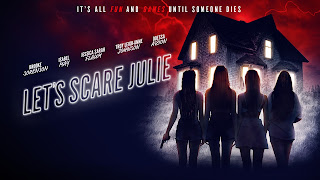 Writer/director Jud Cremata has created his low-budget horror Let’s Scare Julie with the significant gimmick that it was shot in one, continuous, 85-minute take - a challenging undertaking for any filmmaker.

The story begins with a night-time prank being played on 17-year-old Emma, (Troy Leigh-Anne Johnson) by her cousin Taylor (Isabel May) by way of introduction to her group of teen girlfriends. The joke turns out to be not so funny as it brings on an attack of Emma’s asthma.

Their timing is also particularly insensitive as Emma and her 7-year-old sister Lilly (Dakota Baccelli) are staying with cousin Taylor and their uncle Vince (Blake Robbins) because they were recently orphaned by the sudden death of their father.

It turns out that Taylor has invited her three friends - Madison (Odessa A’Zion), Jess (Brooke Sorenson), and Paige (Jessica Sarah Flaum) for a secret sleepover, and a rather obnoxious bunch they turn out to be.

After their initial prank, the girls continue to be noisy, unpleasant and intrusive, asking insensitive questions, invading Emma’s space and rummaging through her belongings, prompting many apologies from Cousin Taylor who struggles to keep the shrieking harpies quiet in the hope of not waking her father who has passed out drunk on a sofa downstairs.

It seems that these bored teen girls have a penchant for playing tasteless pranks and think little of waving a gun around in front of Emma’s 7-year-old sister Lilly. 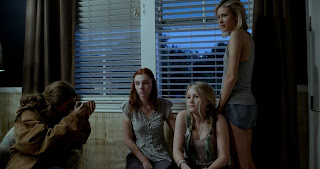 After an overlong introductory scene of the girls talking over each other and larking about, we finally get to the crux of the plot. Every sleepover demands a spooky story and Taylor shares one about her former neighbour across the street, Miss Durer (Valorie Hubbard) who was rumoured to have dabbled in the occult. Apparently, nobody ever saw her save for one boy who disappeared shortly after the macabre-looking woman came out on her porch and graced him with a threatening stare.

A man and his daughter, called Julie, have recently moved into the house across the street that Miss Durer once inhabited. Ever in search of the next victim to play a trick on, it does not take too long before the girl gang devise an ‘amusing’ plan which involves donning some Purge-like masks as disguises and terrorizing Julie, the new neighbour across the road. No matter that she is shy, and a perfect stranger to them all.

Emma refuses to take part in the prank itself but reveals that she knows where a key to the house across the street is hidden, conveniently in the safekeeping of her uncle. So, in an effort to be ‘accepted’ she agrees to fetch it for the girls from under the nose of her drunkenly unconscious uncle. Emma stays indoors with her little sister Lilly while the rest of the teens, eager to scare someone, don their luminous masks and head over to Julie’s house.

We never see what happens across the street, but only two of the girls return. First a terrified Jess appears, jibbering something about her friend falling ‘through the floor’. She is followed by Madison (the most obnoxious character) who apparently has no idea why the others have vanished or why Jess should be frightened. The situation is further exacerbated when they find that 7-year-old Lilly has also disappeared from her bedroom.

Madison concludes that Emma’s cousin Taylor has not returned simply because she has gone directly to the airport to pick up her mother (rather an anti-climax) but she insists on going back to the other house to see what has happened to Paige and to see if little Lilly is there too. Will she too now become a victim of the house? 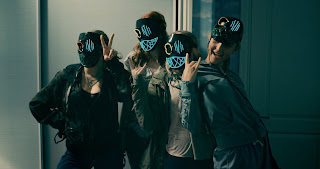 Let’s Scare Julie relies on its continuous one-take approach to create moments of tension and also to allow its young cast to improvise much of their interaction. To give them credit, Johnson, May, A'zion, Sorenson and Flaum try to rise to the occasion and play off one another fairly realistically, creating a naturalistic flow to the proceedings and conjuring up some authentically chaotic situations.

However, with a lack of character development they still come across as a rather noisy bunch of ‘mean girls’, and one doesn’t much care about what happens to them, but I guess that is par for the course in teen horrors.

There is a last-ditch attempt to add some depth by indicating a romantic attraction between two of the girls, but this seems forced because, aside from a previous off-hand comment, there is little to support this development apart from the scene where the generally inconsiderate Madison displays a heroic side to impress her love object. The most sympathetic relationship in Let’s Scare Julie remains the sisterly bond between Johnson’s Emma and Baccelli’s Lilly.

Though the approach of shooting a haunted-house horror without cuts or interruption creates some claustrophobia for the viewer, ultimately, Let’s Scare Julie succeeds in creating little more than a vague evocation of anxiety. Even at a mere 83 minutes, some scenes still tend to drag, with most of the time taken up with the girls messing about or wandering around the rooms of their own darkened house.

What takes place in the house across the street is left entirely to our own imagination. That would not necessarily be a bad thing, as some of the most effective horror movies are those that play upon the imagination of the viewer. However, here the ‘offscreen horrors’ don’t quite pay off as our imaginations are not really given enough material to work with.

After a prolonged, tense build-up Let's Scare Julie doesn’t quite produce the terrifying payoff we might expect - the action in the final minutes simply doesn’t live up to the buildup and the film fizzles to its close like a damp firework.